Home / What to Stream Aug. 28-30: Outside Lands ‘Inside Lands’ Virtual Festival, The Who, Seether, The Avett Brothers, Angel Olsen, TEARS (The Event Against Racism and Stereotyping)

It’s the weekend, again, which means one thing: There’s plenty of streaming events from the music world to keep you entertained at home — which is so important these days, as the COVID-19 pandemic continues its hold over our concept of “normalcy.” If you’re wondering what to stream this weekend, you’ve come to the right place. Here are our streaming picks for Aug. 28-30, 2020.

The San Francisco-based mega-festival was cancelled for 2020 due to the pandemic … but found a way to throw a party anyway. Instead of an in-person event at Golden Gate Park, the “Inside Lands” virtual celebration is on the schedule this weekend. The stream will be watchable exclusively on Twitch — click here for more details about how to tune in from home.

ranger dave has your schedule for #insidelands, streaming exclusively on @twitch! join us for archival performances, live performances, exclusive interviews, and more, august 28 & 29.

follow us on twitch to be notified when we go live: https://t.co/m8vQ3mU85q pic.twitter.com/ioOwzLhl6S

Featuring archival performances and appearances from Gorillaz, Jack White, Haim, Leon Bridges, Brittany Howard and many more acts from throughout the music spectrum, this is a can’t-miss stream for those interested in a virtual music festival of the highest degree. Oh yeah — Sir Elton John will also appear, so don’t miss that!

TEARS: The Event Against Racism and Stereotyping is a global online broadcast from The Man/Kind Project that “serves to unite our voices through an online event that will result in a platform that enables the voices of millions to speak out for tolerance and unity. The show will stream live at 6 p.m. PDT on the Man/Kind Project website.

Per a press release, TEARS will feature a dynamic group of passionate artists and activists who will deliver a powerful testimony and introspection during this critical time by weaponizing empathy and inviting the viewers to share their voices in the fight against bigotry.

Who is Cosmic Streamin’ tomorrow ? Tickets and bundles and info: https://t.co/OC98MovzUc pic.twitter.com/o0CI0jzShA

The Who Tommy: Live at the Royal Albert Hall — Saturday 8/29, YouTube

Saturday, Aug. 29, The Who will continue its Join Together @ Home archival streaming series with a flashback to 2017 and a special performance of Tommy at London’s Royal Albert Hall.

Here’s Roger Daltrey introducing the next installment in the Join Together @ Home series:

Metallica has a new live album/concert film to promote, with Friday’s release of S&M2, the thrash metal band’s new release with the San Francisco Symphony — and on Saturday ‘Tallica will play a special drive-in concert event, screenign in outdoor theaters across North America — if that sort of thing is up your alley.

On Friday, acclaimed folk/rock band The Avett Brothers will release The Third Gleam, a new eight-song collection of music. To commemorate its release and bring some live music back to fans, the Avett Brothers will also host a live stream concert event from the Charlotte Motor Speedway on Saturday, Aug. 29. The event is sold-out for in-person attendees, but the show will stream on Nugs.net beginning at 8:30 p.m. EDT.

RT if you already have your livestream ticket for next Saturday’s show & let us know where you’ll be tuning in from 👀
___
Get access to the livestream (discount for #AvettGuild members!): https://t.co/97cAhs48Gr pic.twitter.com/9EvkdbWsb0

South African hard/rock band Seether is releasing its eighth album this week, and Si Vis Pacem, Para Bellum (“If You Want Peace, Prepare for War”) warrants a special sort of live stream concert — and that’s what the band is offering on Sunday, Aug. 30.

Locked & Live will help raise money for the band’s crew, and donations will be accepted during the stream benefiting SAVE (Suicide Awareness Voices of Education). The show will begin at 3 p.m. EDT/12 p.m. PDT. 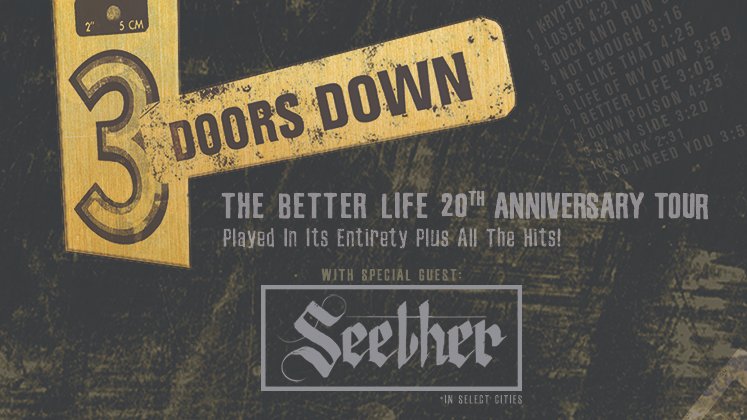