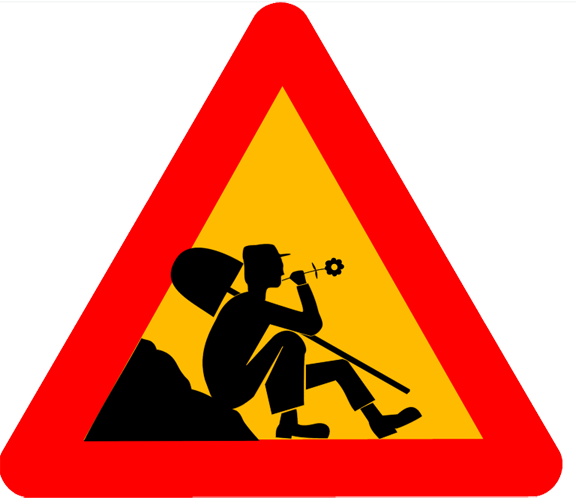 Note: This piece originally ran in time for Labor Day 2012.

Since 1894, when Madonna was just a toddler, the U.S. has celebrated Labor Day –

…a yearly national tribute to the contributions workers have made to the strength, prosperity, and well-being of our country. — U.S. Dept. of Labor

Whatever.  For the rest of us whose work ethic was learned from Maynard G. Krebs, Homer Simpson, and The Dude, we celebrate the slackers with our…

It’s a stretch to imagine Bob Dylan scrubbing floors for a living, but he does in 1965’s Maggie’s Farm. You can’t blame him for quitting on Maggie; Dylan says that her father “puts his cigar out in your face just for kicks.”  That’s gotta hurt.  Interpreters of the Dylan oeuvre (read: interminable gasbags) maintain that Maggie’s Farm was the recently-electrified Dylan’s repudiation of the folk music scene.

2. The Animals: We Gotta Get Out of This Place

Eric Burdon doesn’t need an actual job to know he wants no part of hard work.  (Join the club.)  Burdon gave up after he watched his daddy workin’ and slavin’ his life away.  We Gotta Get out of This Place, written by Brill Building regulars Barry Mann and Cynthia Weil, became an anthem in 1965 for people trapped in dismal, depressing conditions: troops fighting in Vietnam, say, or anyone at a Bobby Goldsboro concert.

Released in 1970 on his first post-Beatles album, John Lennon’s Working Class Hero makes it plain: the working man is screwed.  Accompanying himself on acoustic guitar, Lennon says society “tortured and scared you for twenty-odd years / Then they expect you to pick a career.” Hey, twenty years of torture and fear is good training for what you’ll get from your boss.

I’m a Lazy Sod was recorded live in 1976; the track was only available on bootlegs until Anarchy in the UK: Live at the 76 Club was released in 2001.  In I’m a Lazy Sod, Johnny Rotten screams, “I don’t work / I just speed / That’s all I need / I’m a lazy sod.” He wasn’t kidding. The Sex Pistols only produced one studio album and a handful of singles in their entire existence.

Earning a living by examining mail for letter bombs convinced government bureaucrat Mick Jones that it would be easier dodging beer bottles in punk rock clubs as a member of the Clash.  It inspired Jones and Joe Strummer to write Career Opportunities, which includes the line, “I hate the civil service rules / And I won’t open letter bombs for you.” The song lists the mind-numbing, dead-end jobs young Brits had to take thanks to the sour economy of 1977.  Sound familiar?

Sadly, all three of the founding members of the Ramones – Joey, Johnny and Dee Dee – have gone on to that great job fair in the sky. It’s Not My Place (In the 9 to 5 World), from 1981’s Pleasant Dreams, makes their position on work clear, though it’s hard to believe they’d received many job offers.  Bonus points go for name-checking insane TV host “Uncle Floyd” Vivino.

For something that Todd Rundgren has called a “throwaway song,” 1983’s Bang the Drum All Day remains popular.  Radio stations play it on Fridays at exactly 5 p.m. to jumpstart the weekend; sports teams blare the song when their teams score.  Rundgren says when he gets home from work, “I get my sticks and go out to the shed / And I pound on that drum like it was the boss’s head.”  Maybe he works in the Post Office.

Lou Reed’s underrated 1983 LP, Legendary Hearts, featured Don’t Talk to Me About Work, the tale of an office worker’s hell. What cube monkey hasn’t felt like Reed: “How many insults must you take in this one life? I’m in prison most of the day.” Of course, Reed’s workday doesn’t include having a shank stuck in his side or sewing curtains for a cellmate named Snake. Regardless, office work is tough.

9. George Thorogood & The Destroyers: Get A Haircut

Think father knows best? George Thorogood’s 1993 Get A Haircut tells of a parent’s advice to a kid who dreams of joining a band: “Clean your act up and don’t be a slob / Get it together like your big brother Bob / Why don’t you get a haircut and get a real job?” Next time your parents offer similar words of wisdom, tell them Thorogood has sold 15 million albums and ask how many albums they’ve sold.  Then be ready to duck.

In 1994’s Soul Suckin’ Jerk, alternative rocker Beck raps about working his fingers down to the manicure at a chicken joint “making money for the Man.” Beck, who’s ripped off more musical styles than the Colonel has secret herbs and spices, declares, “I ain’t gonna work for no soul-suckin’ jerk.” Oh please. You work for a record company.

11. They Might Be Giants: Seven Days of the Week (I Never Go to Work)

This catchy ditty, recorded for Disney’s 2008 children’s album Here Come the 123s, purportedly teaches kids the days of the week. But there’s a subversive message underachievers everywhere will appreciate: “On Mondays, I never go to work / On Tuesdays, I stay at home / On Wednesdays, I never feel inclined / Work is the last thing on my mind.”  Perhaps TMBG’s sequel will be a song that teaches the little bums how to get on food stamps.

Frank Mastropolo is a former network news producer and freelance journalist who lives by that old Italian proverb: “Laugh and the world laughs with you. Prov and you provolone.”

Todd Rundgren and Rivers Cuomo Team Up for ‘Down With the Ship,’ a Reggae-Tinged Song/Animated Video