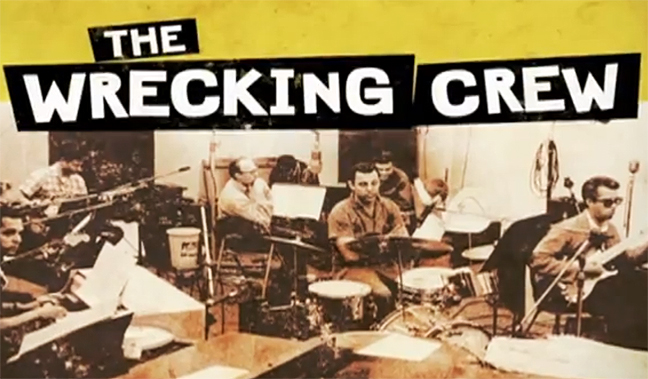 Watching a screening of the music documentary The Wrecking Crew is like going 15 rounds with  Juan Manuel Marquez: the HITS  just keep on comin’ and comin’ and comin.’
God Only Knows! Wichita Lineman! I Got You Babe! Mr. Tambourine Man! Little Old Lady From Pasadena! MacArthur Park! Don’t Worry Baby! He’s a Rebel! These Boots are Made for Walking! California Dreamin’! Eve of Destruction! Fun Fun Fun! River Deep Mountain High! Let the Sunshine In! You’ve Lost that Lovin’ Feelin’! This Diamond Ring! Everybody’s Talkin’! Surf City! San Francisco! Out of Limits! By the Time I Get to Phoenix! Cherish! Dizzy! Poor Side of Town! California Girls! Never My Love! Good Vibrations! Up Up and Away! Da Doo Ron Ron! I Get Around! Classical Gas! Strangers in the Night! Midnight Confessions! The Beat Goes On!… and on and on and on.  One after another after another.
Toe-tapping audience members can scarcely contain their joy (or their singing voices) as the first notes of every familiar tune fly at them rapid-fire.  And with each new salvo of nostalgia, viewer-listeners are left asking themselves that same baffling question:  “the SAME BAND played all of these songs?!”
Indeed they did.  The movie tells the story of a relatively small group of studio musicians nicknamed “The Wrecking Crew” that played on almost every hit single of the late 1960s and early 1970s.  With a relentless work ethic and a mastery of the recording process these 20 or so souls formed a backing unit the likes of which was never seen before, nor will ever be seen again. 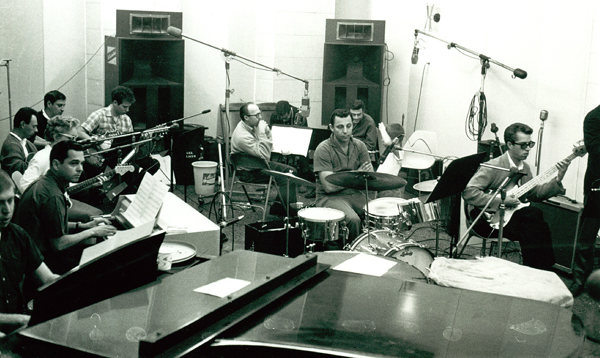 Despite the fame of these timeless songs, the individual members of this band of music-makers toiled in relative obscurity, and to this day most of the world wouldn’t  know their names or faces.  But for the songwriters, performers, producers and record companies of the era, these working-class professionals were, for a time, the fuel for the era’s solid gold hit machine.
Director Denny Tedesco interviews the players and the superstars that the crew helped make superstars, but it’s more than a mere historical documentation of a bygone era, for Denny’s dad – the late guitarist Tommy Tedesco – was one of the entertaining ring-leaders in this circus of merry men (and woman).  As such, Tedesco’s cinematic touch is personal and heartfelt as he goes back in time to discover what his father did when he went to work every day and night.
Despite the film’s cult popularity, numerous awards and legions of manic devotees, The Wrecking Crew – like its namesake – is still unknown outside of the music industry.   It has yet to be released on DVD for the very same reasons that it is so uniquely great – the hundred-plus song snippets that have to be licensed and paid for.  To this end Tedesco has himself been a one-man wrecking crew, spending all his time and personal finances in a quest to finish the financing.
After a recent screening, a 50-ish long-haired guitarist was overhead remarking – “This movie is like musician porn.”  Rock Cellar Magazine sat down with filmmaker Denny Tedesco to find out just why this movie evokes such pop ecstasy, and when the hell we can all buy it. 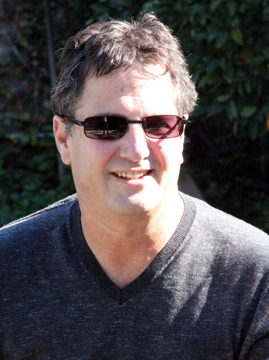 Rock Cellar Magazine:  What inspired you to create The Wrecking Crew documentary?
Denny Tedesco:  In 1996, my father was diagnosed with terminal cancer.  He was 66 at the time and even though he was young at the time, I always, felt we were blessed to have him this long.  He had a stroke that ended his career in 1992 and never really took care of himself.  I had always wanted to tell the story about my father and his friends that were later named, “The Wrecking Crew.” So when the cancer diagnosis came, I didn’t want to have that regret over my life of not doing it when I had the chance.
RCM:  So you got your Dad, and a few of his fellow musicians together for a little reunion.  That scene was the first scene you shot, right?
DT:  Right.  I was in the film business, so I asked my friends to help me.  We put a round-table together with drummer Hal Blaine, bass player Carol Kaye, sax-player Plas Johnson and my father. 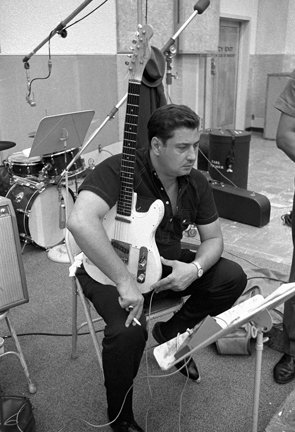 RCM:  Tommy Tedesco, your father – who played guitar.
DT:  Yes, among other instruments.  We were shooting 16mm film at the time.  I had two dollies, two cameras circling these four legends.  I call it “the quartet without instruments.” (laughs) My goal was to just let them be musicians and not really do the interview.  My favorite films at the time were Diner and Broadway Danny Rose.
RCM:  That’s exactly what it reminded me of.
DT:  Both these films let the actors just be real when there is a group of them at the table. And with this group of musicians, you can’t get more real.  I would throw something out there and they ran with it.  First day of shooting was eye opening for me.  Gave a great base to start with.
Click here to continue to Page 2