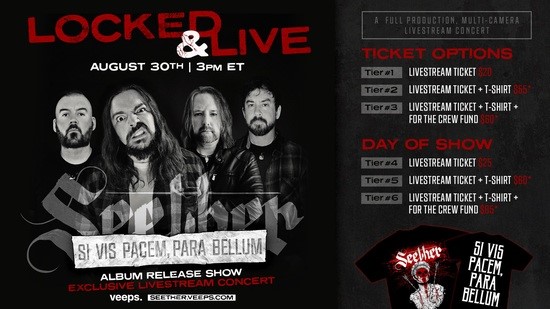 On Aug. 28, South African hard-rock band Seether will return with its eighth full-length album, and Si Vis Pacem, Para Bellum (“If You Want Peace, Prepare for War”) is shaping up to be a strong addition to the group’s catalog, one that has led to significant global acclaim and success over the years.

That weekend, Seether will host its first-ever full-production live stream concert event. Announced on Tuesday, Locked & Live will help raise money for the band’s crew, and donations will be accepted during the stream benefiting SAVE (Suicide Awareness Voices of Education). The show will begin at 3 p.m. EDT/12 p.m. PDT.

Tickets for the live stream event start at $20 and merchandise packages are available — click here for full details.

Si Vis Pacem, Para Bellum has been previewed by Seether in recent weeks with a handful of tracks. “Dangerous,” its lead single, is No. 7 on Billboard’s Hot Rock Songs chart:

“Bruised and Bloodied” is also available:

As is the latest single, “Beg”:

“These songs are carefully crafted to nestle in your ears like a tiny velvet rabbit clutching a switch-blade,” said Morgan about the new album. “This whole album is kind of me going through that process. I’m exposing myself to a degree I’m not normally comfortable with,” he says. “But I think it’s OK. I’m proud to be a little bit more vulnerable on this album.”

Si Vis Pacem, Para Bellum has been ready to go for a few months, after being mixed and engineered by Matt Hyde in December/January. The record will be the first from Seether and its newest member, guitarist/vocalist Corey Lowery.