“What’s the Joker doing in the Met?” guitarist Steve Miller, who was instrumental in helping put the show together, joked after seeing the Metropolitan Museum of Art’s new exhibition “Play It Loud: Instruments of Rock & Roll,” which showcases some of the most iconic instruments in the history of rock and roll.

“Well, the first time I saw the exhibit assembled together, and I walked through, I was stunned by the power and the elegance and the intelligence of this assembled collection of musicians and instruments. It’s really why we all love the Metropolitan Museum so much, and why they’re the best. This is an exhibit that only the Met could bring together.”

More than 100 instruments, including guitars, basses, drum kits, keys and horns played by the likes of Bob Dylan, Ringo Starr, Jimi Hendrix, Joni Mitchell, Prince, Elvis Presley, Patti Smith, Bruce Springsteen and many others, are the featured attraction at the Met’s “Play It Loud” exhibition, which runs through October 1. 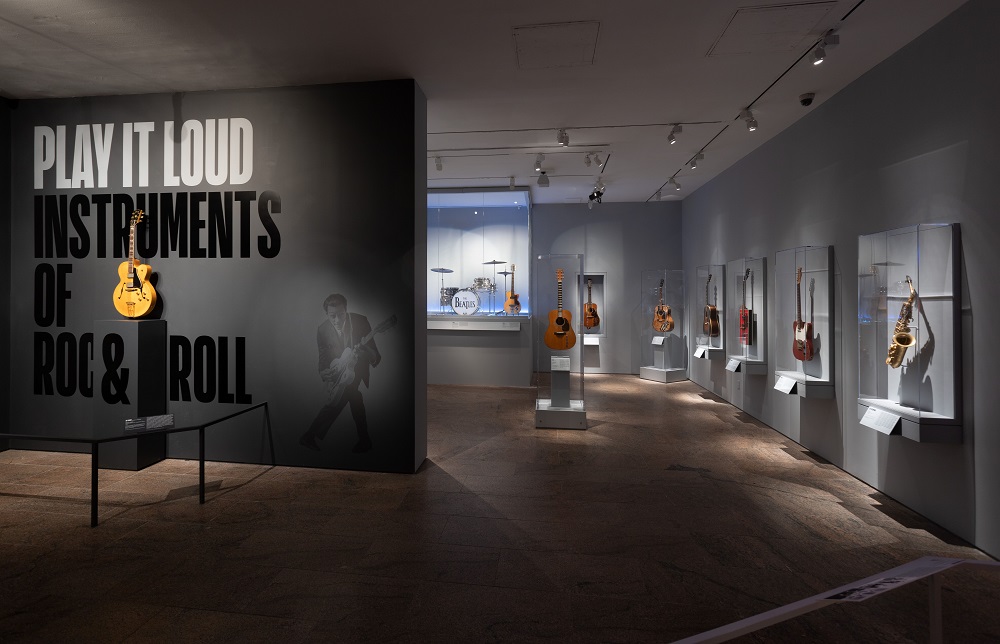 Designed in conjunction with the Rock & Roll Hall of Fame, “Play It Loud” showcases some of rock’s most celebrated and recognized instruments, representing artists across generations and genres.

“We appreciate instruments in a number of ways: As objects, as the creators of records, as documents of the history of music, performance, and culture,” Max Hollein, the Met’s Director, said. “It’s in this context that we approached this exhibition on rock ‘n’ roll, one of the most significant artistic movements in the twentieth century, something that has transformed our lives, our music, our style and our culture. “Play it Loud” is the first art exhibition ever to look at this movement through the lens of the most important objects that it generated: the instruments. We show these instruments as objects that represent the creativity, the spirit, the aesthetics, and the ambition of the times. And we present them as iconic artifacts of extravagant design and craftsmanship, and celebrate them, these unique tools of innovation and of outstanding artistic achievement.”

Ready to rock into the weekend thanks to a visit from members of @judaspriest, who stopped by to say hello to Eddie Van Halen’s Frankenstein guitar—and more than 120 other instruments—at “Play It Loud: Instruments of Rock and Roll.” 🙌🎸 #MetRockandRoll pic.twitter.com/XrSI1QYzjW

It’s the first time a major museum exhibition has examined the instruments of rock and roll.

For “Play It Loud,” the Met worked with institutional and private collectors, as well as some of the biggest names in rock, all of whom have lent pieces from their collections.

Bob Dylan's 1964 Stratocaster has arrived! 🎸 Now on view in "Play It Loud: Instruments of Rock & Roll," this guitar was played by Dylan at the 1965 Newport Folk Festival when he caused a stir by going electric. #MetRockandRoll https://t.co/MHXUqK6iMi pic.twitter.com/zDjRR2Dmil

“I was really keen to be able to do whatever,” Led Zeppelin’s guitarist Jimmy Page recalled of his participation. “I’m sure that everybody that was approached felt the same way.”

“Nine years ago, they called me and asked if I would loan three of my D’Aquisto guitars to the New York Metropolitan Museum of Art for an upcoming exhibit, of archtop guitars,” explained guitarist Steve Miller of his longtime involvement with the Met’s musical instrument department, and of how the exhibition came to be, not to mention why it’s so special. “Three years later, in 2014, they decided to do another guitar show. Guitars shows were doing good business here at the Met. 400,000 people had come to see the guitars. It’s a lot easier to get guitars than Picassos.”

Not long after that, with the success of the previous shows behind them, Miller and Jayson Kerr Dobney, the Met’s Curator of Musical Instruments, hatched a plan to bring an exhibition based around the electric guitars of the rock and roll era to the Met. 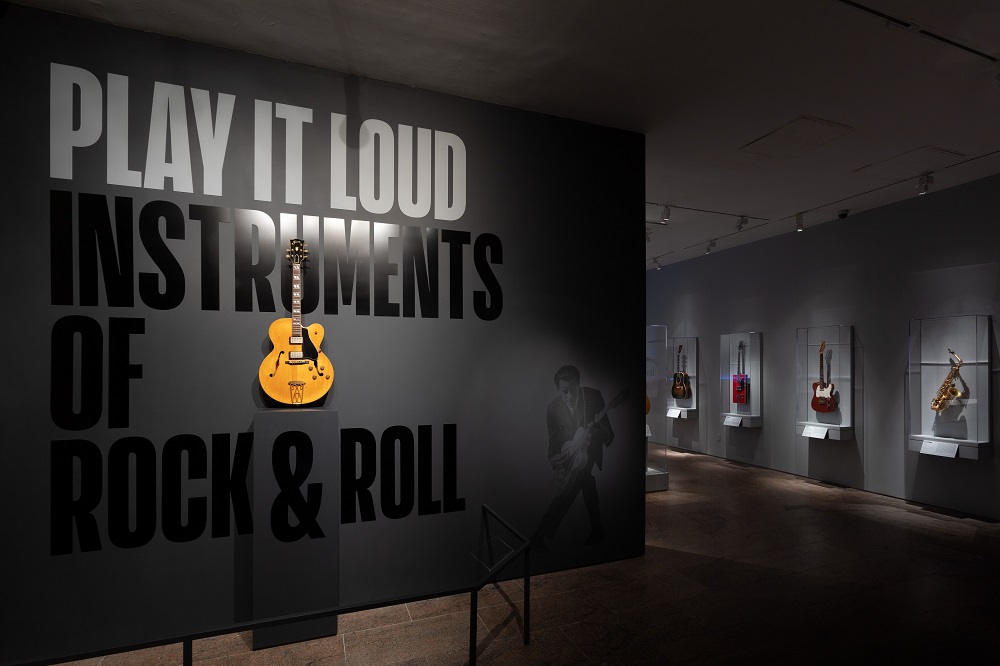 “This is something that I would never have dreamed of in my life,” Page, clearly moved by the experience of seeing the guitars he and so many of his peers –- as well as heroes of his like Chuck Berry and Muddy Waters -– used to create the soundtrack of the past 60-plus years, said. “For me to be here, to see something I would never have even dreamt of as a kid, because like a picture in a gallery, you see Chuck Berry’s guitar standing there, sort of like the holy grail.”

Page’s Led Zeppelin guitars are featured prominently, as are instantly recognizable instruments once played early rock and roll icons like Berry, Bo Diddley and Jerry Lee Lewis; 60s legends like Eric Clapton, John Lennon and Keith Richards; and a laundry list of artists who came in their wake, including everyone from Prince and Stevie Ray Vaughan, to Joan Jett, Tom Morello and even Lady Gaga. (Get a full list of the “Play It Loud” exhibit’s pieces here.)

“It’s a tactile instrument, and it becomes such a vehicle for every single person who plays it,” Page said of the remarkable array of unique instruments represented. “Each and every musician plays with their own character, and inflection. That’s the interesting part of the whole phenomena.”

“It’s probably the highest accolade or the highest honor I’ve ever received,” said former Eagle Don Felder, whose iconic white double-neck Gibson is included in the exhibition, said. “I’ve been inducted into the Rock and Roll Hall of Fame, the Rock and Roll Musician’s Hall of Fame in Nashville, the Florida Artists Hall of Fame, I’m a New York Times bestselling author, I played on the first and third biggest selling albums in the history of recorded music, but to be in the Met, that to me is a couple of steps above and beyond all of it. It’s just such an honor that I’ve never expected growing up in the deep South, in the fields and on the dirt roads in Gainesville, Florida. Like Steve said, when you first walk in, you see Chuck Berry’s original guitar. That is the Holy Grail. So you’re just stunned, right at first, especially if you know who Chuck Berry was, and you grew up learning his licks, like I did, playing “Johnny B. Goode” for years in bands in junior high school. And then as you progress through everything, not only are the instruments very recognizable, like Ringo’s drum set from the Ed Sullivan Show, there are so many iconic instruments there that are associated with either certain bands or certain songs. Then you go along, and you see my guitar hanging on the wall. ‘What is my guitar doing in here?’” 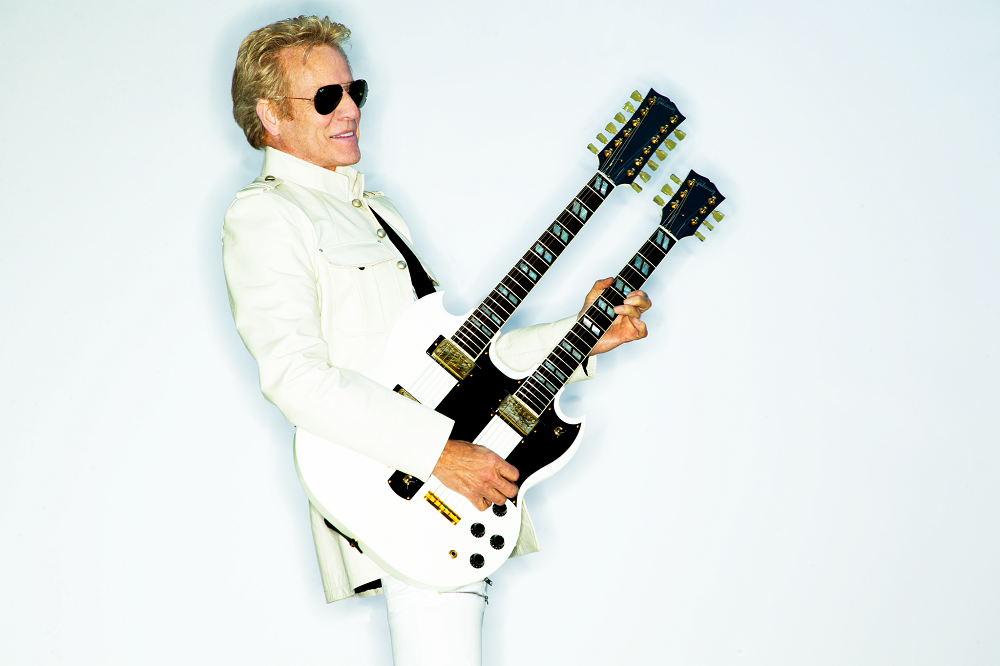 One of the most interesting parts of “Play It Loud,” are the recreated stage sets used by bands like the Beatles, Van Halen and The Who. Other highlights include Jimi Hendrix’s hand-decorated electric guitar, dubbed “Love Drops,” is on display, as are Stevie Ray Vaughn’s favorite Fender Stratocaster, Joan Jett’s signature black and white Gibson Melody Maker, and Eric Clapton’s favorite Strat, “Blackie,” which was sold to music retailer Guitar Center for $850,000 in 2004 in support of Clapton’s drug and alcohol rehabilitation center, Crossroads. While some guitars were customized to the musicians’ liking –- like Clapton’s famous psychedelic SG, given to him by George Harrison, and painted by the Swinging London art duo known as The Fool -– others are shown in the deconstructed glory, as one of Pete Townshend’s guitars is.

“Once you go in the exhibit, the first presence you get is Muddy Waters,” Miller said of the narrative on display as you walk through the Met’s exhibition. “And it’s not a picture of Muddy Waters, it’s Muddy’s real, number-one guitar. And then there’s Elvis’s guitar. And then it just keeps going and going and going. And you get in there and there’s Stevie Ray Vaughn’s number-one Stratocaster, and Jimmy (Page)’s stage setup, and all these people, you feel their presence. All these great artists, and all this great music that has meant so much to the twentieth century, for the first time, you can see together in a serious exhibit that’s really powerful.”

“Play It Loud” curator Jayson Kerr Dobney said he was out to create an exhibit featuring the most recognizable instruments in rock and roll that would in turn illustrate the genre’s development.

“It was really a great collaborative effort between us and the Rock and Roll Hall of Fame,” said Dobney of “Play It Loud.” “We didn’t just want a room with a whole bunch of objects. It had to be some sort of narrative. And that was what was really exciting to us, to just sit down and think about what the different ways we wanted to tell the story were. Certainly historical was important; and we wanted to represent the ‘guitar God’ as a type of figure you don’t find in other music, but the visual dimension, which is very important, was always first and foremost to us. We started pulling on those threads, and that gave us our thematic approach. Then we started to make up lists of instruments that fit those different themes. And we started inviting people to participate.”

When asked, Kerr Dobney couldn’t recall any artists who declined.

Visit the Met’s official site for full details about the exhibit, and be sure to catch it while it’s open.