It used to be that only politicians and war heroes were immortalized on statues that honored their accomplishments. So it’s a good thing that today you’re more likely to see a statue of Lennon than of Lenin.
Many hometowns of rock stars were once ashamed of the excessive lifestyles of their native sons. Today they realize there’s a buck to be made from fans that come from around the world to pay homage to the stars.
Rock Cellar Magazine chose a few of the top statues that honor these music legends, fully aware that one day all 5 members of One Direction will have statues too.
MICHAEL JACKSON 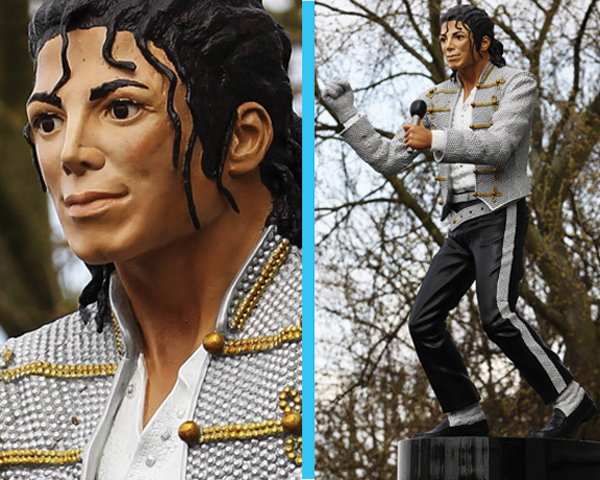 Many sports teams display statues of star players outside their stadiums. In London, the rough and tumble Fulham soccer team erected a statue of… Michael Jackson. Though the 7-foot-tall plastic and resin statue has been called grotesque, team owner Mohammed Al Fayed, a friend of Jacko’s, was unmoved:

“If some stupid fans don’t appreciate such a gift, they can go to hell.”

It could be worse. A London music studio now displays a figure of the King of Pop dangling a baby out of a window, as Jackson did in 2002. 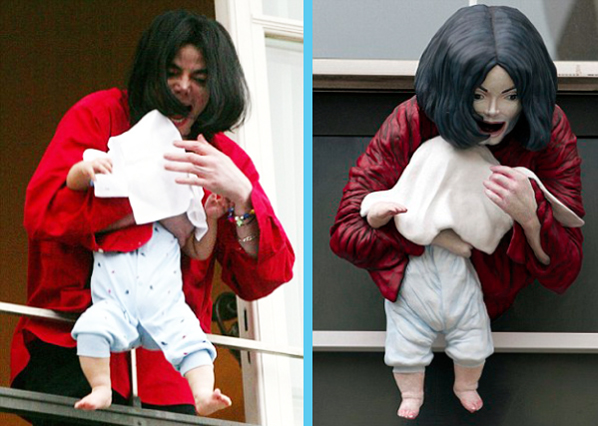 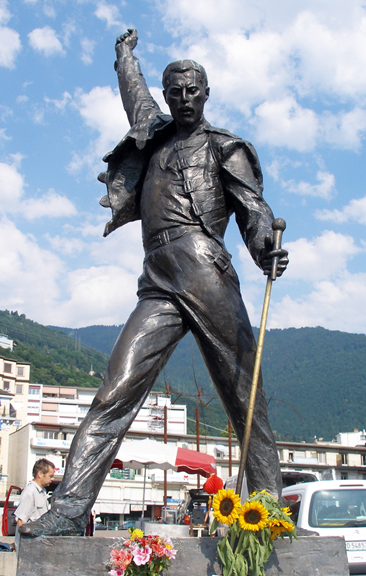 On the first weekend of September each year, Queen fans gather in Switzerland for Freddie Mercury Montreux Memorial Day at a statue of the iconic singer.
Freddie, who had said,  “If you want peace of mind, come to Montreux,” moved to the Swiss town on Lake Geneva after attending the Montreux Jazz Festival in 1978. He later bought Mountain Studios, where he recorded Made in Heaven, his last album with Queen. Sculptor Irena Sedlecka created the 10-foot-tall statue that depicts Freddie in his characteristic concert pose – fist extended to the sky.  Sadly, Mercury died in 1991 without revealing what “silhouette-o of a man” means.
JIMI HENDRIX 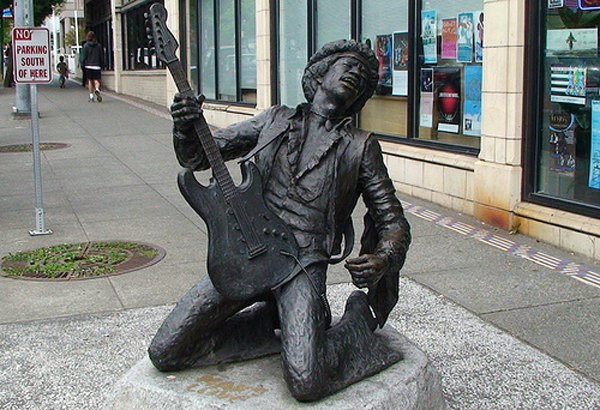 Seattle honors its native son, Jimi Hendrix, with memorials throughout the city.
Perhaps best known is the bronze statue of the psychedelic rocker on a sidewalk of the Capitol Hill section. The life-size bronze of Jimi, who died in 1970, was created by local artist Daryl Smith as one of a series of rock legends; Elvis, John Lennon, Chuck Berry, Bill Haley and Buddy Holly have also been immortalized. The Hendrix statue, on Broadway Avenue, shows Jimi in a classic performance stance, on his knees wailing on his Fender Stratocaster; it’s one Strat that Jimi will never get to smash and set on fire.
JOHN LENNON 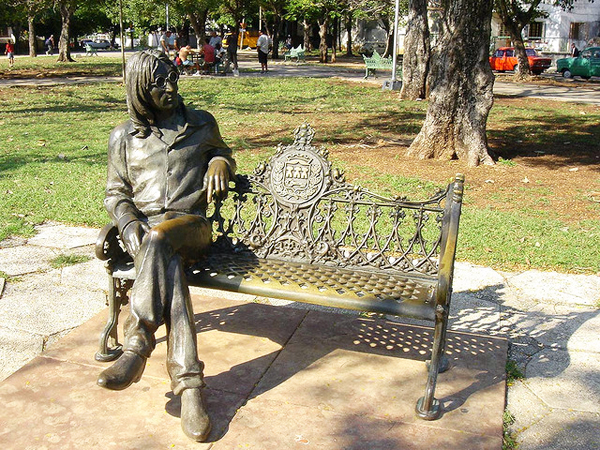 Considered an example of decadent consumerism, Beatles music was banned in Cuba during the 1960s and 70s.
But in December 2000 on the 20th anniversary of his murder, a statue of John Lennon was unveiled in a Havana park by President Fidel Castro. Sculpted by Cuban artist José Villa Soberón, the life-size bronze Beatle sits cross-legged on a park bench; because of repeated thefts, a guard slips a pair of wire-rimmed glasses onto John’s face so tourists can snap a photo.
Inscribed below John in Spanish is a lyric from Imagine: “You may say I’m a dreamer, but I’m not the only one.” Castro explained his change of heart about Lennon by saying, “I share his dreams completely. I too am a dreamer who has seen his dreams turn into reality.” Which is true, if by “dreams” you mean you want to execute anyone who tries to leave the island.
Here’s a video of the guy who puts the glasses on John: 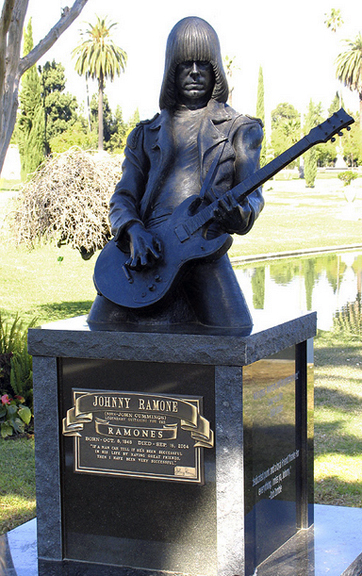 The Ramones were the template for punk rock’s rebellion against the establishment; driving force Johnny Ramone invented the unrelenting down stroke guitar style that defined punk.
Battling prostate cancer, Johnny was inspired to create his own memorial as he watched Ronald Reagan’s funeral.  Artist Wayne Toth took the idea and sculpted an 8-foot bronze statue of Johnny playing his Mosrite guitar. The memorial was installed at Hollywood Forever Cemetery after Johnny’s death in 2004.
JERRY GARCIA 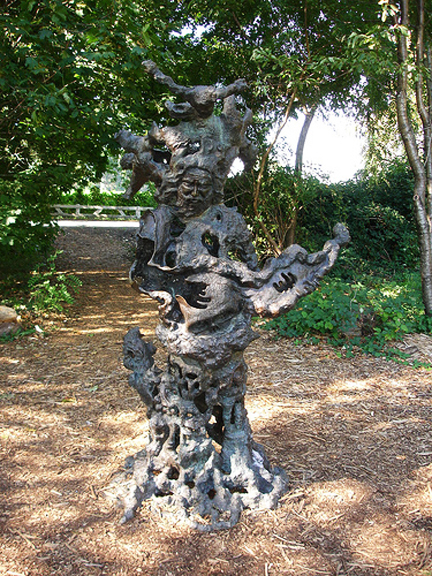 Grateful Dead guitarist Jerry Garcia was certainly fond of plants; he’d smoked enough of them. So I guess it makes sense that artist Joe Cotter created a bronze sculpture of Jerry as a tree for Edgefield, a resort near Portland, Oregon. “Bronze Garcia” stands in a wooded area, a reminder of the terrifying Talking Trees of The Wizard of Oz. Deadheads gather at the site every August to celebrate Jerry’s birthday and life. What a long, strange twig it’s been.
Here’s the Talking Trees Wizard of Oz clip: 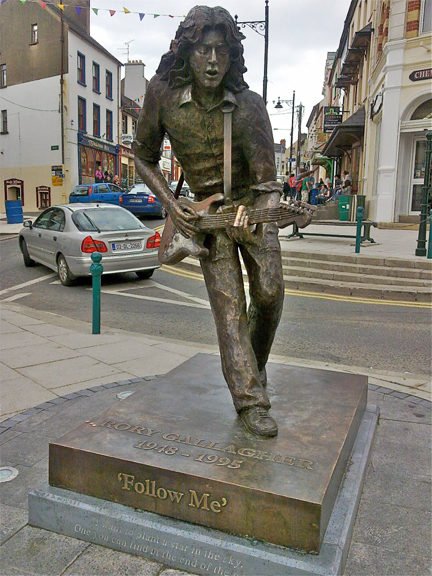 Legendary Irish blues guitarist Rory Gallagher died in 1995 at age 47 of complications from a liver transplant. A bronze statue of Gallagher sculpted by David Annand was unveiled in the guitarist’s hometown, Ballyshannon, in 2010.
While Gallagher’s albums were never huge sellers in the States, guitar greats like The Edge from U2, Slash of Guns N’ Roses and Queen’s Brian May count Gallagher as an inspiration for their playing; Rory was chosen as one of Rolling Stone’s 100 Greatest Guitarists of All Time. 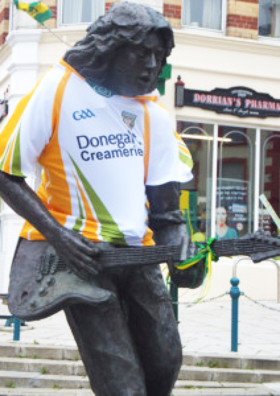 And now he sometimes gets to wear the local soccer team’s jersey.
BON SCOTT 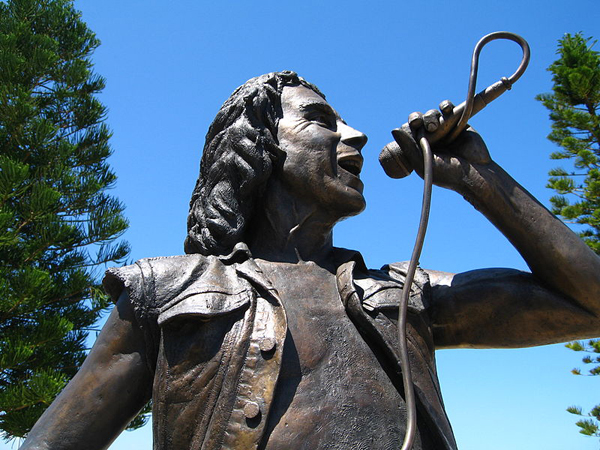 Bon Scott was the voice of Australian rockers AC/DC from 1974 to 1980, co-writing classics like Highway to Hell and Dirty Deeds Done Dirt Cheap. Bon rocked hard onstage and off; he died at age 30 of acute alcohol poisoning after a long night of drinking. 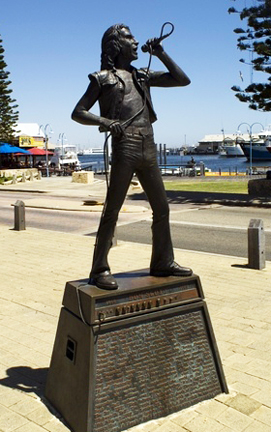 Sculptor Greg James created the life-size bronze of the AC/DC front man belting out a song, standing on an amplifier; it was intended to be displayed in Bon’s hometown, Fremantle. But honoring a rocker who’d died boozing was not an easy sell to the local politicians; bronze Bon had to cool his heels in a local fish ‘n’ chips shop until pols were persuaded to display the statue at the Fremantle Fishing Boat Harbor. Which proves that it’s a long way to the top if you wanna rock ‘n’ roll.
WILLIE NELSON 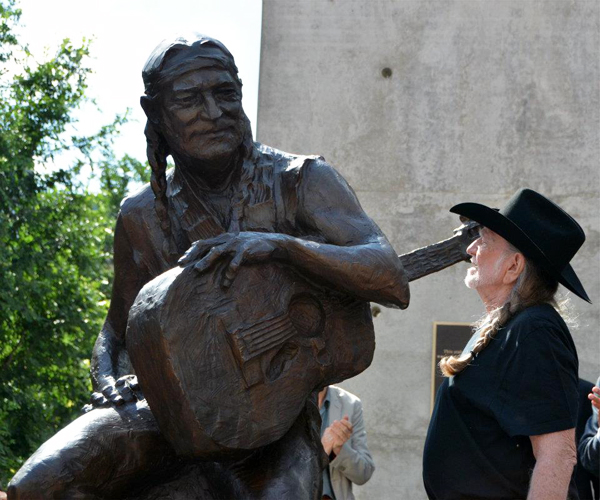 One usually has to be dead before being honored with a statue but outlaw country singer Willie Nelson always did things differently. Nelson was at the unveiling of his statue in Austin in April 2012, an 8-foot-tall bronze sculpture that weighs one ton. The statue is an appreciation of Nelson’s life and career; Willie helped build the Texas capital’s reputation as a live music mecca. Three years in the making, sculptor Clete Shields hoped to capture Nelson’s carefree spirit with a relaxed pose, holding his guitar at his side. Reportedly, an earlier prototype of the statue depicted an IRS agent with his hand in Willie’s pocket.
RAY CHARLES 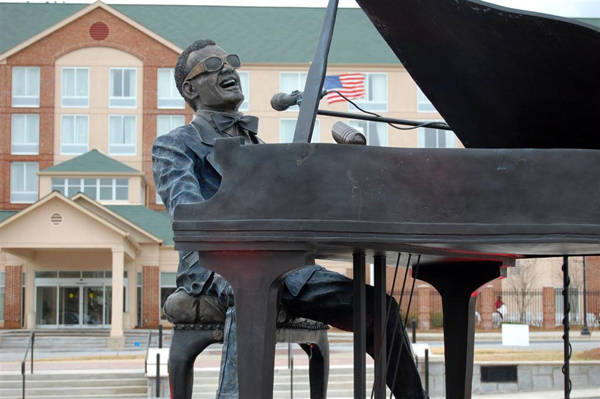