On “Chinese Satellite,” a song on her second full-length album, Punisher, Phoebe Bridgers asks a question that doubles as self-critique:

I’ve been running around in circles
Pretending to be myself
Why would somebody do this on purpose
When they could do something else?

That sense of uneasy self-critique is at the heart of much of Bridgers’ music. Since emerging with 2017’s Stranger in the Alps and later projects with Conor Oberst of Bright Eyes and boygenius, the Los Angeles-based singer/songwriter has carved a unique niche for herself — haunting bits of guitar-based indie-rock and raw introspection, delivered in songs that manage to sound bleak and uplifting at the same time.

Bridgers made Punisher available on Thursday, June 18 — a day earlier than previously scheduled — with a statement:

I’m not pushing the record until things go back to “normal” because I don’t think they should. Here it is a little early. Abolish the police. Hope you like it.https://t.co/vmwERN0SOm

The album art brings it home, Bridgers in skeleton suit (onesie?) gazing up at the vast expanse of the universe and all its overwhelming excess: 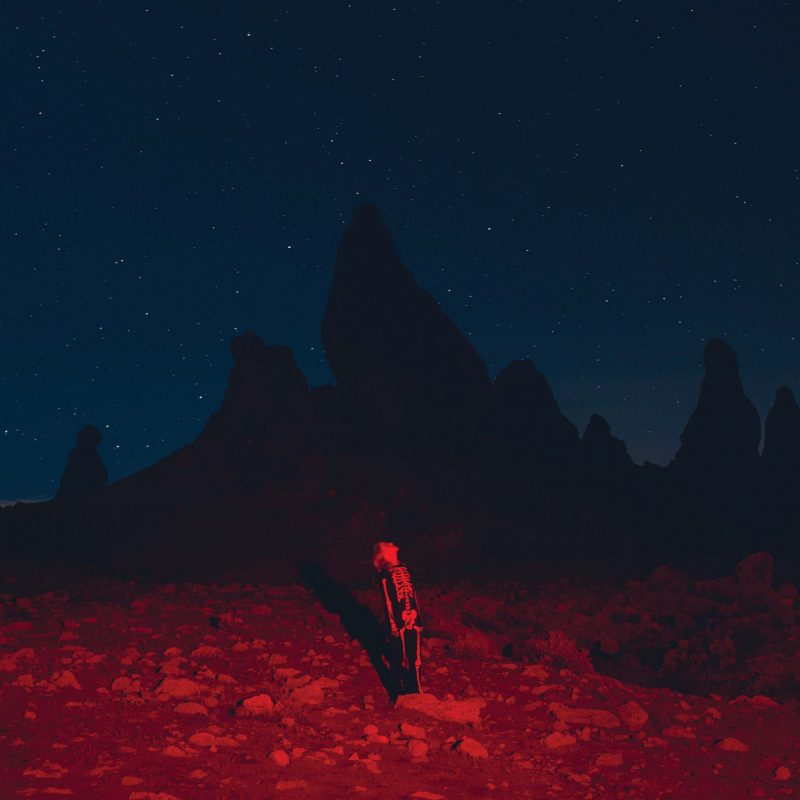 Take “Garden Song,” the first song released from the album, as another example of her knack for clever wordplay, Bridgers offering lines like “The doctor put her hands over my liver/She told me my resentment’s getting smaller.”

Singularly artful expressions of anxiety and existential questioning have drawn music fans and critics alike to Phoebe Bridgers over the past few years, and as a result, Punisher comes with much anticipation. In another reality, Bridgers is out on the road right now promoting the album and opening for her friends in The 1975 (with whom she appears on the song “Jesus Christ 2005 God Bless America,” from the English band’s ambitious new album Notes on a Conditional Form) — but, of course, the COVID-19 pandemic ruined those plans.

In our actual reality, the tour was postponed, but the album is here nonetheless — no release day delays — and that’s a good thing for everybody, because Punisher is very much an album for right now, this precise moment in time.

“Kyoto” is the album’s most “high-energy” song, and it almost sounds upbeat … were it not for the song’s lyrics and inspiration, which Bridgers explained in a statement when the single was premiered:

“This song is about impostor syndrome. About being in Japan for the first time, somewhere I’ve always wanted to go, and playing my music to people who want to hear it, feeling like I’m living someone else’s life. I dissociate when bad things happen to me, but also when good things happen.

A recent New Yorker profile on Bridgers noted that “Kyoto” was written about her fractious relationship with her father, and that fact makes the song’s aesthetic warmth that much more melancholy, wistful reflections simmering under the surface:

That Punisher is being released right now — in a time of significant social unrest and a global pandemic that has ravaged all areas of “normal life,” with the prospect of things returning to what they were a wistful dream — almost seems appropriate, given the record’s themes of unease and vulnerability.

Case in point: “Halloween” and its use of masks, both literal and metaphoric (and a guest spot from Oberst, Blake Mills and legendary drummer Jim Keltner):

Said Bridgers to AllThingsLoud about the song:

“‘Halloween’ is about a dead relationship, but it’s also about death. I think that they are the same thing; it’s weird to be in a relationship which you’re already mourning even when you’re with them all the time.”

Bridgers told Rolling Stone that much of Punisher was inspired by the themes “crying” and feeling “numb,” something that comes across most devastatingly on “Moon Song,” which also contains this lyric:

And then went to bed
Upside down

On social media, Bridgers has a certain self-deprecating wit, the same that shines through in many of her lyrics.

it takes me 15 hours to “get situated”

Another example comes from Instagram, where this post of an album advertisement for Punisher, blown up and on display in an eerily empty Times Square elicits only “lol” as commentary:

Much of Phoebe Bridgers’ music comes from a perspective of somebody reacting to the world around them, a world in which they exist, perhaps uncomfortably, experiencing a ton of conflicting emotions about the whole thing.

Pre-release track “I See You” brings back Bridgers’ yearning to actually feel something in this life, the song one of the album’s strongest in terms of presenting the most immediate qualities of her music. It’s specifically inspired by her previous relationship with Marshall Vore, who remains a close friend and musical colleague to this day (and worked on the song with her):

Pals Lucy Dacus and Julien Baker, Bridgers’ colleagues in boygenius, stop by for the tender country/folk of “Graceland Too,” another highlight of the record.

The album closes with “I Know the End,” a rousing, shape-shifting finale that features Oberst, Dacus, Baker, Blake Mills, Christian Lee Hutson, Nick Zinner and Bright Eyes’ Nathaniel Walcott on horns, a venerable indie all-star jam session that wraps things up with a bang, a group refrain of “The end is near” cascading about with the orchestral flourish of a whimsical Sufjan Stevens outro.