On June 19, Phoebe Bridgers will release her awaited second full-length album, Punisher. It was previewed in recent weeks with the track “Kyoto,” and on Tuesday “I See You” became the third song released thus far from the indie singer/songwriter:

Said Bridgers of the song in a statement:

“It’s about my breakup with my drummer. We dated for a few years, made music every day, and were extremely codependent. We became like family to each other, so our breakup was extremely tough. But if this tells you anything about our relationship, we wrote this song together, just like everything else.”

In addition to the premiere, Phoebe Bridgers announced a new tour — sort of. Originally supposed to be out on the road with The 1975 right now, that tour was scrapped due to the COVID-19 pandemic.

Instead, she’ll embark on the Phoebe Bridgers’ World, Tour, essentially a series of at-home performances in her kitchen, bathroom and bed, which was detailed with this amusing poster: 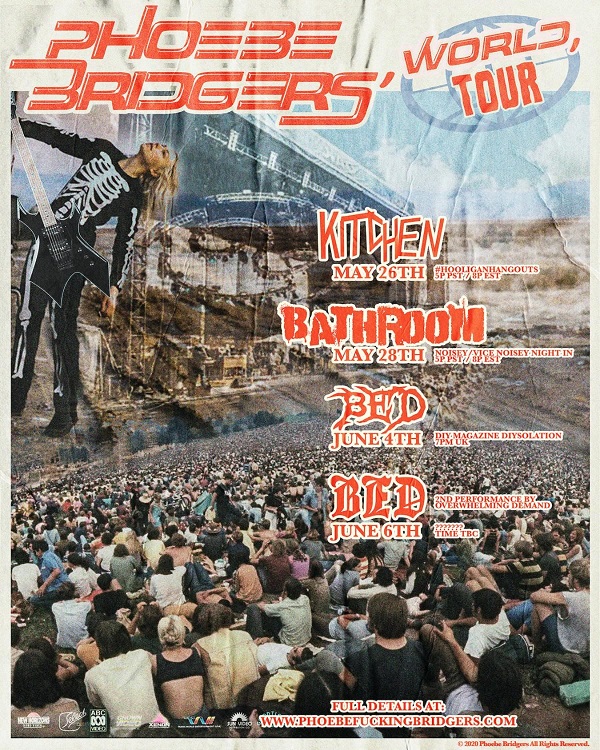 “Garden Song” was the first song released from Punisher, complete with a music video:

Following that was “Kyoto,” which featured a green-screen music video that came about after Bridgers’ original plans of shooting a video in Japan in March 2020 were ruined by the pandemic.

Of that track, Bridgers explained:

“This song is about impostor syndrome. About being in Japan for the first time, somewhere I’ve always wanted to go, and playing my music to people who want to hear it, feeling like I’m living someone else’s life. I dissociate when bad things happen to me, but also when good things happen. It can feel like I’m performing what I think I’m supposed to be like. I wrote this one as a ballad first, but at that point I was so sick of recording slow songs, it turned into this.”

Here’s the track listing for Punisher: