Okay, I’ve hocked you enough on the woeful shape of modern music:  Berton Averre’s Blog.
Time for a departure.  Today we’ll talk about the woeful shape of modern American movies.
To be honest, I really don’t go to movies anymore.  I’ll occasionally tune them in on Netflix, or HBO.  As a matter of fact the following opinions are based almost solely on the tv commercial trailers.
I’ll admit this might not seem the most comprehensive, or the fairest, measure of the works of our modern-day cinema auteurs.   I suppose it’s quite possible that the Mission Impossible series contains compelling human moments, eye-popping dramatic twists, and unique and memorable images that are immediately emblazoned on the conscious of the movie-going public.  And that the best, most economical way to present those qualities of excellence in film-making in a trailer is to show Tom Cruise rappelling through yet another high-rise picture window.

Lest I give a mistaken impression that I’m accusing the makers of the MI movies of lack of originality, I should point out that in previous films Tom Cruise is shown to be flying out of a high-rise picture window, whereas in the present trailer, he can clearly be seen flying in.  Now, that’s a twist!   Move over, Keyser Söze.
To my eyes, it seems as if American moviemaking has been reduced to a handful of genres, and woe betide the exec or D-person who suggests that the studio sink its ungodly millions into a movie that doesn’t (horrors!) fit comfortably into one of the accepted pigeonholes.
As a service to you, I am going to present these genres, as gleaned from trailers:
#1 GIVE ME BACK MY DRAMA! — The main character gets a phone call in Act One:

I have your wife/son/daughter/German short-haired pointer.  If you don’t give me the 30 million dollars I’m sure you have lying around the house, I’ll kill her/him/them/this delightful pooch.   Hell, I’ll probably kill them anyway: I’m that evil.

The husband/father/adoptive owner (played exclusively by an aging leading man: let’s call him Harrison Liam) then takes administrative leave from his job as a tax assessor to launch a Navy Seals attack. 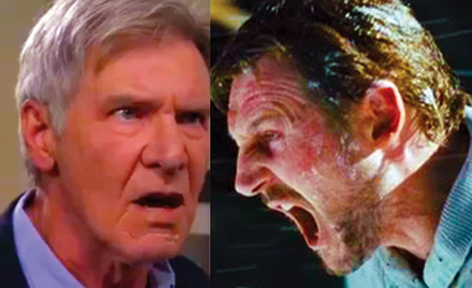 After much blood and shrieking, the evil evil bad guy/gal/rottweiler is vanquished by Harrison Liam, the family unit is reunited and, in a touching Disneyesque turn, Spike the Pointer astonishes all by having puppies.   Laughter ensues, and we roll credits.
[FANTASY WORLD MOMENT: screenwriter is forced to submit to getting thwacked in strategic locations by rubber bands, punctuating the following speech: “We (THWACK) have seen (THWACK) this movie (THWACK) before (THWACKTHWACK THWACKTHWACK.”]
#2 “ROMANTIC” “COMEDY” — A clever wag once noted that the interesting thing about  French Sex Comedies is that they’re neither sexy nor funny.
I wouldn’t be so foolish as to suggest that the current crop of American starlets aren’t sexy: I’m sure they’re extremely appealing.  I can bet they’re also spunky, feisty, quirky, and delightfully in-your-face.  That’s what makes modern American romantic comedies “edgy”, you see. 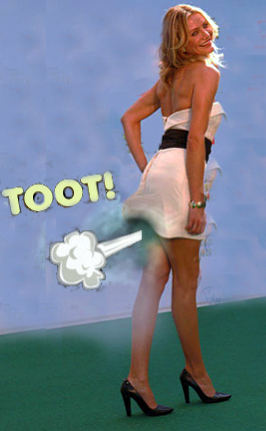 If, say, Seth Rogan were to belch loudly onscreen it may strike some of us as a bit broad.  But should Cammy Diaz down a beer, then burp loudly?  Or better yet, fart?  Oh no she di’n’t!  Kudos for the courage to “go there”, young American filmmakers.
One disturbing element in movie trailers for romantic comedies is the ubiquitous image of Julia Roberts laughing: I have long been of the opinion that this fine actress (not being facetious) has never, and I mean never, made a movie in which she doesn’t have at least one notable scene in which she treats us to a huge horse-laugh.
And this scene always, and I mean always, shows up in the trailers.  Someone should do a YouTube of Julia Roberts guffawing in her movies, editing the moments from all her trailers.
(Editor’s note to Berton:  you should get out more often):

#3 ROBOTS, COMPUTERS, AND GUNS, OY VEY. — We come to that staple of fine American moviemaking, the action movie.
Of course, we’ve already dipped our toes into those murky waters with the GIMME BACK MY DRAMA! genre, but with Rs, Cs, and Gs we’re getting down to brass tacks.  That is, if brass tacks weren’t way too normal and boring to make an appearance in this genre that exists solely for its gadgets and special effects.
Now, I’m no Luddite, but C.G.I. has gone in a relatively short time from an artistic choice to a total capitulation.  We can’t count anymore on creating thought-provoking films with those moments of special empathy and connection that gives storytelling its hallowed place in human existence.  But we can make something look great, and so that’s what we’ll do.  I think C.G.I. must stand for “Can’t (otherwise) Generate Interest”. 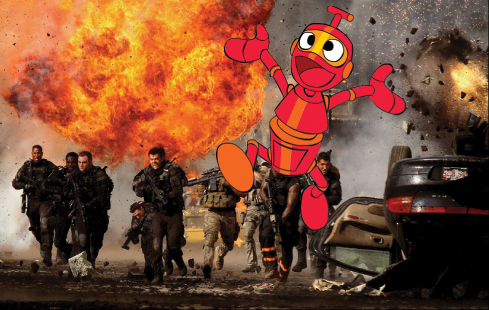 I mean, seriously, what is it that people who enjoyed Transformers came away with?  Did anyone who liked the movie describe to you what actually happened in it, or did they instead wax rhapsodic on the look, the C.G.I.’ed robots?
It’s gotten to the point where live action movies are treated visually so that the actors will look like animated characters.  Huh?  I saw Beowulf a few years back — I saw it because it was being riffed by Rifftrax, which happens to be what the heroic guys from Mystery Science Theatre 3000 are doing these days. 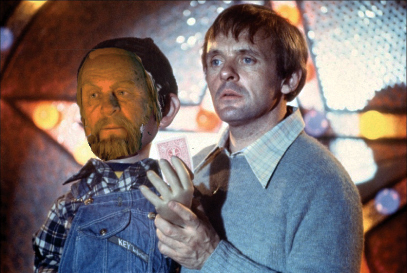 One of the best actors of our generation, Anthony Hopkins, plays a role in the film.  But the actors in the scenes were C.G.I.’ed up the ying yang so it looked more like animation than live action.  What is the frickin’ point?  Why hire a great actor, pay him the enormous fee he must demand, and then draw on his face so his human expressions are obscured to the point of ridiculousness?
#4 BLOOD-SUCKING SEXPOTS, BRAIN-SUCKING POTBOILERS — Apparently vampires are in.
A while back some genius figured out that there is a sexual undertone to the Dracula legend (reeaalllly?)  Incidentally, I’ve always been in the minority on this one: I can’t imagine any sexual experience enhanced by the overt presence of blood.
The thing about vampires, though, is it’s not hard to make them look really cool, what my girlfriend and I call “H.S. and E.” (Hot, Sexy, and Edgy).  Tight black leather?  Black hair, white skin, crimson lips?   And that’s just the guys– (ba dum bump, remember to tip your waitress).

Every trailer for these films seems to feature a young actor who looks roughly like a Jonas Brother who has given in to peer pressure and become a junkie like all his fellow Disney Network alumni.
I’m sure fans of this genre will be quick to inform me that there is indeed a moral and emotional complexity to these Type O-rgasms.  By the way, I’ve always wanted to be a film critic, solely so I could review a slasher movie thusly:

It ran the gamut of emotions from A to AB Negative.

You see, the sexy bloodsuckers are technically bad, but….wait for it…they’re also kinda good, being, you know, sexy and all.   Where have I heard this before?
Oh, yeah!  It was a character named Barnabas on Dark Shadows, a mid 60s soap opera.  Once again we have to stand and applaud the current crop of screenwriters for their courageous leaps into mediocrity and me-too-ism.

Dark Shadows Trailer – Remade by Tim Burton, with Johnny Depp
And of course that’s what I’ve been banging on about all along.  Robert Towne, when he wrote Chinatown, wasn’t grabbing the coattails of a tried and true formula.   Oh, sure, it was a conscious re-framing of the Raymond Chandler novels-made-movies.  But that was just a starting point, the fabric chosen.  This reference point no more minimizes Towne’s achievement than citing director Roman Polanski’s exquisitely painstaking effort to create the look of 40s Los Angeles minimizes his overall work.
But today’s moviemakers would say, “See, Jack Nicholson’s Bogie, and John Huston’s Sidney Greenstreet.  And the look, all the period buildings and stuff, is fantastic.”, and consider their work done.  And then they shake their head in wonder when the one movie that can’t be consigned to one of the above genres (like, say, Sideways) is the only movie that gets talked about that year.  Gee: warn’t that a coincidence?