The legacy of The Sopranos lies in the powerhouse acting performances delivered by the HBO series’ principal cast members. The series, an engaging and thoughtful mafia story that unfolds in the East Coast starred James Gandolfini as Tony Soprano, though its themes far surpassed that of most “crime drama” depictions of that lifestyle. Among the standout performers on the series was Michael Imperioli, who portrayed Chris Moltisanti for much of the series’ six seasons.

These days, Imperioli is staying quite active in the Sopranos community, co-hosting the Talking Sopranos podcast with cast mate Steve Schirripa, who played Bobby Baccalieri on the show.

But there’s more. Imperioli is also a musician, and in early July he released La Dolce Vita, a new album with his band, Zopa.

My bands album is up on bandcamp. Elijah Amitin, Olmo Tighe and I are ZOPA. Link in bio. #rocknroll #rockandroll #indierock #thesopranos #newalbum #new

Featuring Imperioli on guitar and lead vocals, Elijah Amitin on bass, keys, vocals and production and Olmo Tighe on drums and vocals, the trio has an engaging, unique sound with a nod to guitar-based bands from decades past.

The album was recorded in Brooklyn and is available to stream on Bandcamp.

For those who watched The Sopranos but maybe didn’t know the personalities of its stars outside the program, the existence (and depth) of this album might be a bit of a surprise. Listening to La Dolce Vita, especially songs such as “In Pink” and “Last Exit,” it’s clear just how much of a passion project Zopa is for Imperioli and his band mates.

Having never actually watched The Sopranos in its entirety prior to the past few months (inspired in large part by the free time at home facilitated by the COVID-19 pandemic), this was a delightful surprise. Imperioli’s Chris Moltisanti was one of the show’s most engaging characters, and finding out he’s a lifelong fan (and participant) of indie rock was, for some reason, not something I expected. (He also expands on his love of music to great detail in a new piece with the Quietus).

This surprise was the result of a related news story trending this week, stemming from an Instagram post by Imperioli. Namely, that Gandolfini (who passed away in 2013) was a MAJOR fan of Green Day‘s breakthrough 1994 album Dookie — so much so that he played the vinyl in his trailer on set.

And the comments, Imperioli sharing insight only he could: 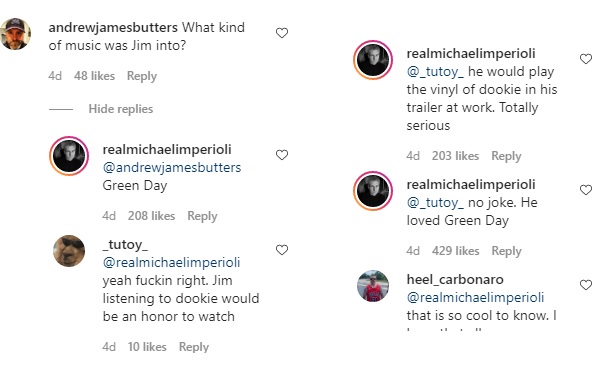 With that context, this reworking of the Sopranos intro might have made more sense …

Anyway, back to Michael Imperioli and Zopa. Here’s hoping we can all return to live music in the hopefully not-too-distant future, because the band’s sound would translate very well to a concert setting.

New from Green Day’s Billie Joe Armstrong: Stream His Cover of ‘Police on My Back,’ from The Equals (and Later The Clash)