When Melissa Etheridge began the creative process to what would become 15th studio album, The Medicine Show, she took a different tack than usual. Utilizing bassist David Santos’ home studio outside Nashville, the veteran singer/guitarist crafted the sonic terrain first.

“I had a very specific idea of what I wanted the music to sound and feel like,” said Etheridge, calling from Pennsylvania amid a summer tour including several shows with Pat Benatar.

“I was able to get the rhythms going. A lot of them started on drums. I’m not an accomplished drummer, but I started laying the rhythms down, the feeling that I wanted, and went from there. I think it made for a strong backbone to put all the songs on.”

Part of the impetus for that mindset came from a revelatory solo tour supporting 2014’s underrated This is M.E. release, where she looped and layered various rhythms and instruments together onstage.

“That had a huge effect on me as an artist,” Etheridge admitted. “Going out there by myself, standing up in front of people and building the songs from the rhythms to the guitar — that’s when I started really soloing myself and discovering my own sounds. It was a real learning experience for me, that tour. When I went into the studio, I had more confidence. I felt like I could build this record up in very much the same way.”

During previous recording experiences, Etheridge typically left guitar solos to session musicians. Not this time. After John Shanks (who produced 2010’s Fearless Love and was involved in Breakdown, Lucky and Your Little Secret) returned to the fold, she stressed, “I really need to play lead guitars on this. He patiently guided me on how to make that happen in a studio setting. He’s a very accomplished studio guitarist and I really learned a lot from him.”

Their comfort level from past music experiences together also helped.

“John is like my brother. I’ve worked with him since my very first tour. He knows me. I can absolutely say anything to him.”

Another goal Etheridge had with The Medicine Show was to return to the spirit of the 1990s, a period when she reached the pinnacle of success, thanks to the multi-platinum efforts Yes I Am and Your Little Secret, plus pop and rock radio hits such as “Come to My Window,” “I’m the Only One,” “If I Wanted To” and “I Want to Come Over.”

Etheridge sought out “something that is just straightforward me: my songwriting and music. I wanted it to sound similar to rock ‘n’ roll of the ‘90s and bring that into what I was making with today’s technology.”

Among The Medicine Show standouts are “Shaking,” a chunky rocker about fear; “I Know You,” a sweeping relationship ballad; and the earthy “Wild and Lonely,” a passionate love song directed at Etheridge’s television producer/writer wife Linda Wallem (“Nurse Jackie,” “Cybill”). The latter tune contains an exciting buildup, a trademark gritty Etheridge wail and nearly verges on Neil Young & Crazy Horse territory at the end.

“Thank you so much,” she said of the comparison. “Neil Young is definitely an inspiration on how to be a lead singer and play the guitar.”

Then there’s the throwback R&B groove in “This Human Chain.” It was inspired by a news story Etheridge read where people in another country came together and formed a human chain in the ocean to save a drowning man caught in a riptide. She had no qualms about including such an outlier.

“I told John, ‘let’s bunk this up.’ He wanted to go even more retro. I said, ‘let’s keep it in today.’ It has this retro taste with today’s feel.”

Traditionally, Etheridge writes lyrics that are layered, with the meanings becoming more evident after successive listens. Does she prefer not to have everything laid out so easily?

“More that, if you want to just listen the songs once or twice, you can carry away a meaning. But if you do want to listen a few times, you can really dig in and find pleasant little surprises in the lyrics and music. You can really go deeper and deeper into it.”

Topical tracks like “Here Comes the Pain” (about opiate addiction) and “The Last Hello” (sung from the perspective of school shootings like Stoneman-Douglas High in Parkland, Florida) definitely fit into that idea.

As Etheridge was first starting out as a musician, she was inspired by songwriters known to pen tunes on a deeper level.

“You know who I really loved? Joni Mitchell, Joan Armatrading, Peter Gabriel, Bruce Springsteen and Neil Young. These are artists that really craft a song.”

Physical versions of The Medicine Show have this cover tagline: An unrivaled true story of redemption and a ’74 Fender — a reference to Etheridge’s overall vision.

“My wife said, ‘what does this album mean to you?’ I said, ‘redemption.’ That’s what I’m looking for. The ’74 Starcaster Fender is like a magic guitar for me. It’s me finding my own voice through an electric guitar now.”

The unique, weathered painting style of the cover (adorned with marijuana leaves; a prominent subject in some lyrics and Etheridge’s own life) makes a strong case for fans to purchase a physical copy. How does she feel about continuing to find album artwork and sequencing tracks in the streaming age? 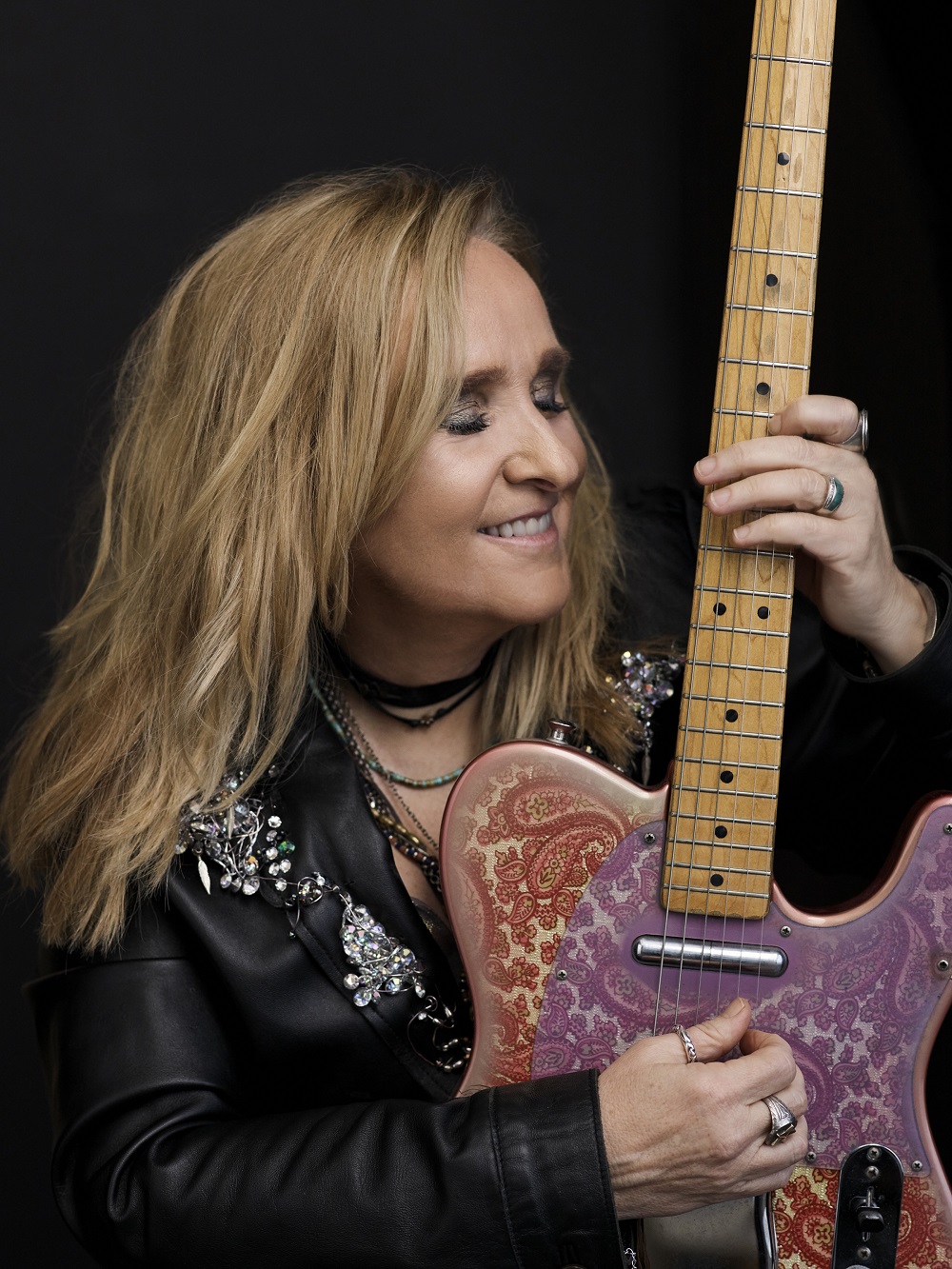 “You know, I’m grateful that people can listen to music everywhere and anywhere at the drop of a hat. They don’t have to go find that record and put it on. I can just be part of people’s lives anywhere they are and that’s great.

“Also, for the 1% or whatever that actually still buys vinyl and physical product, I really enjoy putting the time into making an album’s worth of music, to creating album art and to making a physical product. There are still people who enjoy that.”

Since last year marked the 25th anniversary of Yes I Am, Etheridge did a special tour and played all the songs. She rediscovered the benefit in playing “Resist” because it “was a really rocking song,” as well as “Talking to My Angel.”

“It’s funny — all the songs on that album still stand up. I can play them anytime in any set and they are always welcome.”

The artist attributes the mammoth success of Yes I Am to the fact that “the early and mid-‘90s were just a magical time for music. People were really open to songwriters. The acoustic guitar didn’t scare people away. It was a beautiful time. We were waking up to the beautiful variety of humanity that we have. I think that album came at the right time.”

A testament to those songs’ popularity was recently exemplified in Netflix’s new drama series revival of Tales of the City, loosely based on author Armistead Mauphin’s novels about LGBT people in San Francisco. In one episode, Laura Linney’s straitlaced heterosexual character Mary Ann Singleton warbles through “Come to My Window” at karaoke in a bar.

“Bless her heart! [Linney] is not known as a singer. That’s not an easy song to sing,” said Etheridge. “I had great admiration for her and really appreciate being part of that culture and recognized. I was incredibly honored.”