Today, April 1, 2019, is the 35th anniversary of the day legendary soul singer Marvin Gaye passed away, and the eve of what would have been his 80th birthday. To honor his memory, here’s Jeff Slate’s feature with Gaye’s biographer, David Ritz, on the singer’s previously ‘lost’ album You’re the Man, which was released on March 29.

The singles “What’s Going On” — the title track from the universally acclaimed album — plus “Mercy Mercy Me (The Ecology)” and “Inner City Blues (Make Me Wanna Holler”),” also from What’s Going On, had each hit No. 1 on Billboard’s Hot Soul Singles charts, after each had gone Top 10 on the Pop charts the previous year. His new single, the percolating groove of “You’re The Man,” a sarcastic riff on political non-action released just as Richard Nixon kicked off his re-election campaign, was climbing Billboard’s Hot Soul Singles chart, on its way to Number 7.

“He always struggled,” David Ritz, the author of the most comprehensive biography of the music icon, tells Rock Cellar. “I called my biography Divided Soul, because half of Marvin Gaye was devoted to bringing musical light into the world and the other half caught up in darkness and depression.”

Although Motown scheduled a You’re The Man album, when the lead single didn’t cross over to the Pop charts, stalling at Number 50, the ever-present demons Ritz says dogged Gaye, getting the better of him. He became ambivalent about recording, stubborn about moving to Los Angeles, where his label, Motown, and its head, the legendary kingpin Berry Gordy, were about to relocate.

To everyone around him, it seemed there would be no new Marvin Gaye music for the foreseeable future.

“In my view, it stalled because it didn’t have the weight of a fully conceived album like What’s Going On behind it,” Ritz says, reflecting on the tumultuous period in Gaye’s career. “It was a brilliant single, but isolated. In contrast, Trouble Man, Let’s Get It On and I Want You were self-contained suites of songs.”

But unbeknownst to all but a small cadre of intimates, Gaye was in the midst of a creative fury.

“What’s Going On was a triumph and exceeded all expectations, thus freeing Marvin to do whatever he wanted,” Ritz says. “He was finally his own man creatively.”

And so, Gaye set about recording more than an album’s worth of music in Detroit and Los Angeles. He produced the sessions himself, working with the songwriter and producer Willie Hutch — known for penning the Jackson 5 smash “I’ll Be There,” who would soon create legendary scores for the blaxsploitation films The Mack and Foxy Brown — as well as fledgling songwriters like Pam Sawyer and Gloria Jones. He also cut two tracks with Freddie Perren and Fonce Mizell, part of the hit-making machine behind the Jackson 5, and collaborated with Hal Davis, who was helping Gaye prepare for sessions with Diana Ross, recording the topical song, “The World Is Rated X.”

He also funneled his anger over the Vietnam War, and his brother Frankie’s experiences there, into what can only be thought of as a sequel to “What’s Going On,” the holiday ballad, “I Want To Come Home For Christmas.”

Gaye also reworked “You’re The Man” as an eerie funk jam, perhaps with an eye toward adding it as a bookend to the single, or reprise, like The Beatles’ uptempo version of “Sgt. Pepper’s Lonely Hearts Club Band” that winds down the group’s 1967 “concept” LP before the epic closer “A Day In The Life.”

But remarkably, none of the tracks recorded during the sessions, except for the already-released single, were issued at the time.

In celebration of Gaye’s 80th birthday on April 2, Motown/UMe has released You’re The Man, the 1972 Tamla/Motown album that never was. Featuring all of Gaye’s solo and non-soundtrack recordings from 1972, with most of the album’s tracks making their vinyl release debuts, as well a new mix of “My Last Chance,” by SaLaAM ReMi, the songwriter and producer best known for his work with Nas, Fugees, and Amy Winehouse, and two other album tracks, “Symphony,” and “I’d Give My Life For You.”

Also included are a rare, long version of Gaye’s cancelled 1972 Christmas single, “I Want To Come Home For Christmas,” plus an unreleased vault mix of its instrumental B-side.

Stream the album in full below, via Spotify:

While songs from You’re The Man have been included in several CD releases over the years, this marks the first time that all but two of the album’s 17 tracks have appeared on vinyl.

“Harry Weinger, the great A&R reissue producer, conceived it,” Ritz explains of the project. “His sensitivity to Marvin’s music is the reason the album sounds all of a piece. I believe he’s channeling Marvin’s spirit and sense of what makes a cohesive album. And I love it because it brings to light You’re The Man — Marvin’s political side at a time — 2019 — when that’s really needed.”

The re-imagined You’re The Man seems to fit remarkably between What’s Going On and the follow up releases, the Trouble Man soundtrack and Gaye’s biggest selling album, Let’s Get It On.

“Exactly, it’s a stepping-stone in his development as an architect of concept albums,” Ritz says, adding that I Want You and Here, My Dear are important next steps that came later in the ‘70s, but that fans can here the germ of here.

Ritz also counters the criticism that You’re The Man might be seen as a hodge-podge of outtakes and unreleased demos. 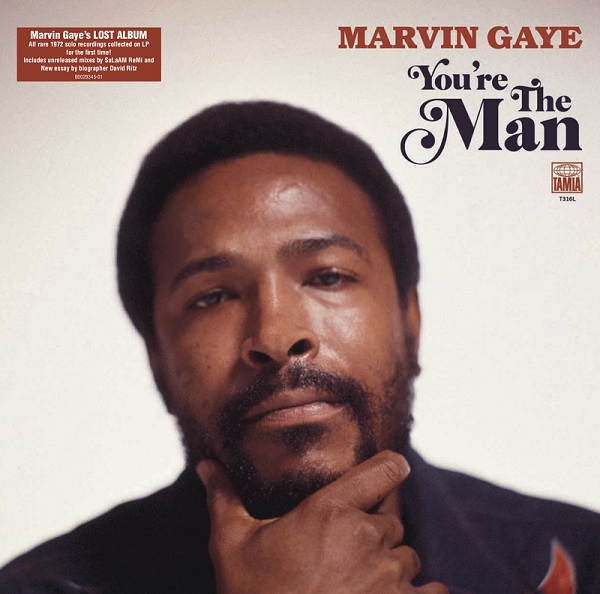 “He was fueled by What’s Going On, creatively,” he says, firmly. “Anytime he was in the studio, he was excited and creatively alive. Life inside the studio was beautiful for him. Life outside was challenging.”

You’re The Man also includes new liner notes by Ritz. In his essay, Ritz delves into Gaye’s deeply personal internal conflicts, digging deep into the inspirations and burdens the legend experienced in the aftermath of What’s Going On’s massive success.

“Now I could do what I wanted,” Gaye tells Ritz, in a quote included in the liner notes, from an interview that first appeared in Ritz’s book, Divided Soul: The Life Of Marvin Gaye. “For most people that would be a blessing. But for me the thought was heavy. They said I’d reached the top, and that scared me because Mother used to say, ‘First ripe, first rotten.’ When you’re at the top there’s nowhere to go but down. No, I needed to keep going up — raising my consciousness — or I’d fall back on my behind. When would the war stop? That’s what I wanted to know — the war inside my soul.”

Despite the inner turmoil Gaye clearly wrestled with, the same year You’re The Man was recorded, he recorded a duets album with Diana Ross, and began what would become the astonishing Trouble Man film score. Just a year later, he released Let’s Get It On, which became an even more massive success than What’s Going On, and the biggest his career.

“Marvin was the most autobiographical artist I’ve worked with,” Ritz says, reflecting back on the man he knew. “He lived it first, then wrote it. For him, music was always deeply personal. But most of all, spiritual factors — rather than social or political or cultural — drove him.

He was a seeker who sought salvation through music. The studio was his church.”

So what message does You’re The Man send to fans of Marvin Gaye, whether they’re first generation followers, or new fans just discovering him? Ritz thinks he has the answer.

“The message is that his gift was greater than his smash hits reveal,” Ritz says of the man whom he became friends with late in the icon’s life. “He was a subtle singer and sophisticated writer whose range of subject matter was enormous. Despite his divided soul, he married the secular to the sacred with exquisite grace –and, at the same time, always kept it funky.”