Keane Returns with ‘Cause and Effect,’ UK Band’s First New Album Since 2012 — Listen

It’s been quite a long time since Keane, the massively successful indie/rock band from East Sussex, released a new record — 2012, in fact.

But today, the band has brought an end to that seven-year drought with Cause and Effect, Keane’s fifth full-length to date and first bit of new music since their hiatus, which spanned 2014 until 2018.

The band previewed it with an epic single titled “The Way I Feel” back in early June:

Keane’s music has always been predicated on emotion; Their most beloved songs, including “Somewhere Only We Know,” from 2004’s Hopes and Fears, and “Is It Any Wonder?” taken from 2006’s Under the Iron Sea, helped establish the band as a global phenomenon due to vocalist Tom Chaplin’s earnest delivery and the uplifting, anthemic nature of their arrangements.

That’s very much the case again with Cause and Effect, proving that even a substantial time off between albums might have brought out the best the band has to offer.

During their hiatus, Chaplin devoted his time to a pair of solo records, but he felt that itch for Keane the entire time:

“I found myself wondering how I had come to let this very enigmatic and important relationship in my life drift,” he said in a statement.

Tim Rice-Oxley, multi-instrumentalist/songwriter/singer of the band apparently worked on material during the downtime, and it effectively provided the band the jumping off point it needed to get going together once again:

When Tom, bassist Jesse Quin and drummer Richard Hughes heard the songs, they were immediately drawn to them both sonically and lyrically. From there, the band found themselves back in the studio doing what they love, bringing these songs to life and reconnecting to each other. “Hopes and Fears was a break-up album too,” Tim said, referring to Keane’s acclaimed 2004 debut, with “Somewhere Only We Know,” a massive hit, covered by Lily Allen, Kacey Musgraves, David Archuleta, and others. “But it was about a break-up when I was 19. It’s a bit different when you’re older and you’ve got kids – your whole little world shifts on its axis.” 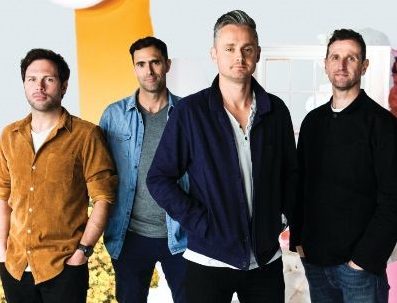 Keane will promote the album and their career with world tour dates in the coming months. The schedule: