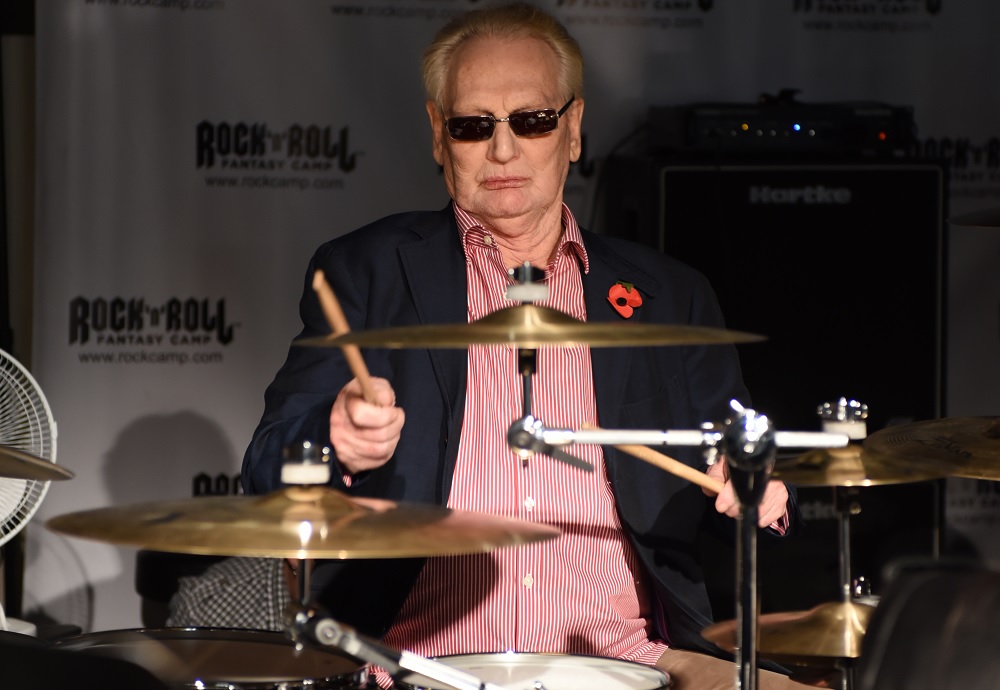 After falling critically ill in the hospital on Sept. 25, legendary drummer Ginger Baker has passed away at the age of 80, his family reported on Sunday in a statement posted on his social media pages.

“We are very sad to say that Ginger has passed away peacefully this morning,” reads the message on Baker’s Facebook page. “Thank you to everyone for your kind words to us all over the past weeks.”

We are very sad to say that Ginger has passed away peacefully this morning. Thank you to everyone for your kind words to us all over the past weeks.

The social media presence of Jack Bruce, Baker’s band mate in Cream who passed away in 2014, issued a heartfelt message on behalf of Bruce’s family and friends in remembrance:

The Bruce family would like to extend their sincere condolences to Ginger Baker’s family, friends and fans. Surviving a love hate relationship, Ginger was like an older brother to Jack, their chemistry was truly spectacular. RIP Ginger, one of the greatest drummers of all time ❤️ pic.twitter.com/G9Pl4Qecdp

“The other day I had a beautiful visit with my dad…we talked about memories and music and he’s happy that I’m keeping his legacy alive. Our relationship was mended and he was in a peaceful place. Thank you all for the kind messages and thoughts. I love my dad and will miss him always.”

From Will Johns (guitar, vocals):

“I have really fond memories of Ginger. When I was a kid, he would play games with me and was always a lot of fun when I would see him at Eric’s house. I can remember always asking Pattie, ‘where’s Ginger, where’s Ginger??’ He was cool and I loved him.”

“Much love and peace to Ginger’s family and respect to him. He leaves an incredible and innovative legacy. He always explored across the boundaries of creativity, collaborating with musicians from other cultures before the term ‘world music’ was adopted by others, and had a truly musical ability and a natural sense of what was true and beautiful. Rest in peace. It has been an honour to know you!”

Other legends also shared their condolences regarding Baker’s passing, including:

I’m sorry to hear that Ginger Baker passed. He was a great drummer and we all were fans of Cream back then. “Sunshine Of Your Love” was a great one. Love & Mercy, Brian

Ginger Baker, great drummer, wild and lovely guy. We worked together on the 'Band on the Run' album in his ARC Studio, Lagos, Nigeria. Sad to hear that he died but the memories never will. X Paul pic.twitter.com/Rne4tn6A2i

Steve Winwood posted a lengthy message on his official site:

A very sad loss, and my condolences to his family and friends.

A loss also for his contribution to music. He was well-grounded in jazz from very early on, and later managed to combine this with African and rock music to create his own inimitable style of playing.

I was lucky to play with him in Ginger Baker’s Air Force, and to meet and work with such luminaries as Phil Seamen, Harold McNair and Graham Bond. And also in Blind Faith with Eric Clapton and Rick Grech. Although his appointment was very unorthodox (he showed up on the doorstep and said, ‘Here I am’) – he made a great contribution to the Blind Faith album which has withstood the test of time.

Beneath his somewhat abrasive exterior, there was a very sensitive human being with a heart of gold.

RIP Ginger Baker. One of the greatest drummers of all time. Begin with Cream’s Disraeli Gears. https://t.co/dObwjvWrva

Ginger Baker, the creative drummer who played with Cream has passed away.
Rest in peace Sir, I doubt we’ll see your likes again.

Baker, who had recently turned 80 years old on August 19, dealt with a number of health issues in recent years, including open heart surgery in 2016 that directly led to his retirement from live touring.

The NME noted that Baker revealed an ongoing battle with chronic obstructive pulmonary disease and chronic back pain due to osteoarthritis, as well.

Baker, of course, co-founded Cream with Eric Clapton and Jack Bruce in 1966, moving on to Blind Faith alongside Clapton, Steve Winwood and Ric Grech, before decades of other projects and a solo career that firmly established him as one of the foremost drummers to ever pick up a pair of sticks.

A 2013 documentary titled Beware of Mr. Baker brought Ginger Baker’s wild presence and career to the world of cinema:

And these videos, courtesy of Rock Cellar contritubor Ivor Levene, are the last-known footage of Baker drumming in a public setting, from Rock and Roll Fantasy Camp in 2015.