Eddie Van Halen Dies at 65 After Battle with Throat Cancer 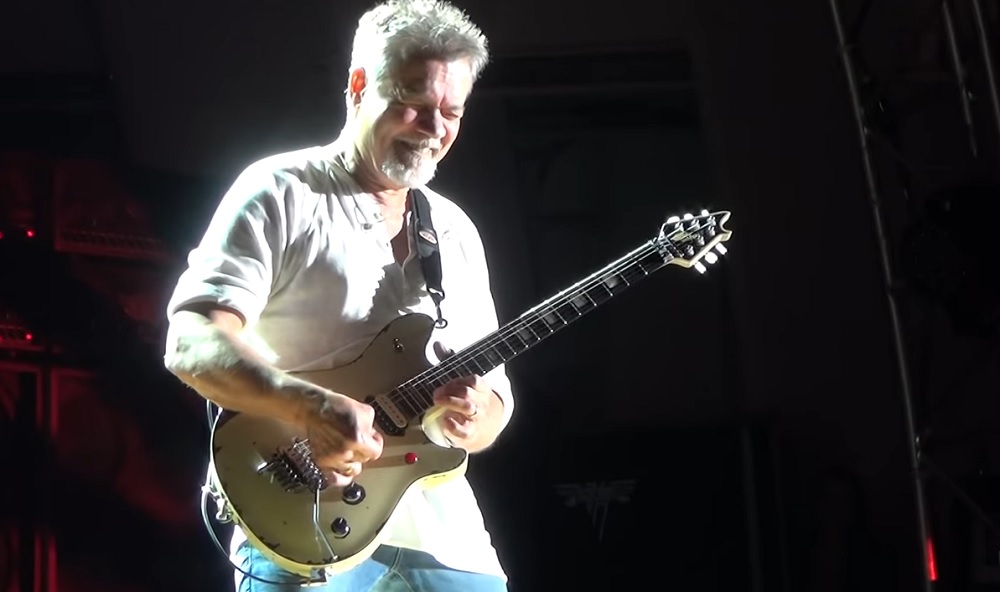 Eddie Van Halen, renowned guitarist of Van Halen and all around legend, has passed away after a battle with cancer.

The tragic news was shared by his son, Wolfgang Van Halen, on social media on Tuesday:

I can’t believe I’m having to write this, but my father, Edward Lodewijk Van Halen, has lost his long and arduous battle with cancer this morning.

He was the best father I could ever ask for. Every moment I’ve shared with him on and off stage was a gift.

My heart is broken and I don’t think I’ll ever fully recover from this loss.

I love you so much, Pop.

Eddie had been battling throat cancer for some time. In October 2019 it was revealed by TMZ that the guitarist had been traveling back and forth between the U.S. and Germany to receive treatment.

On Tuesday, TMZ‘s report of Van Halen’s death noted that doctors had discovered that his cancer had moved “to his brain and other organs,” prompting his overall health battle to go “massively downhill.”

A true “guitar hero” of the highest order, Eddie Van Halen’s influence was unrivaled, his legacy unmatched, his fans among the tens of millions around the world. He will be missed.

Among his musical adventures outside of Van Halen, he also collaborated with Michael Jackson, delivering a guest-spot guitar solo on the song “Beat It” that has come to be one of the most iconic solos ever recorded:

Amazingly, that solo only took half an hour to record. Per CNN:

He did it for free, as a favor to producer Quincy Jones, while the rest of his Van Halen bandmates were out of town. “I said to myself, ‘Who is going to know that I played on this kid’s record, right? Nobody’s going to find out.’ Wrong!” he laughs. “Big-time wrong. It ended up being Record of the Year.”

News of his passing led to an outpouring of love from his friends and peers on social media:

Heartbroken and speechless. My love to the family. pic.twitter.com/MQMueMF2XO

I’m just devastated to hear the news of the passing of my dear friend Eddie Van Halen. He fought a long and hard battle with his cancer right to the very end. Eddie was one of a very special kind of person, a really great friend. Rest In Peace my dear friend till we meet again. pic.twitter.com/Qs8tsLPANJ

I’m really sad to hear about the passing of Eddie Van Halen. A brilliant guitarist.

Eddie literally changed the way players play the guitar. That band upstairs is getting pretty damn amazing. Prayers and healing to his family, friends, and fans. ❤️ @eddievanhalen #eddievanhalen

Oh man. Damn. I love you Eddie Van Halen. A true rocker, a deep musician, a HUGE heart, an LA boy through and through. A bold innovator and the undisputed king of all wheedlers. What a sound!!! I hope you jam with Jimi tonight and soar freely through the cosmos. A vibrant part of music has left this earth. Broken through to the other side. What a sweetheart, my brother. All love and condolences to your family. ❤️❤️❤️

Oh NO! Speechless. A trailblazer and someone who always gave everything to his music. A good soul. I remember first seeing him playing at the Starwood in 1976 and he WAS Eddie Van Halen. So shocked and sad. My condolences to Wolfie and the family. https://t.co/ExAWzFAEYJ

RIP Eddie Van Halen. Van Halen were a tremendous influence on both Vinnie & Dime & Pantera. Hopefully they are all rocking out together now! pic.twitter.com/XtnL33aGsd

Eddie literally changed the way players play the guitar. That band upstairs is getting pretty damn amazing. Prayers and healing to his family, friends, and fans. ❤️ @eddievanhalen #eddievanhalen

Music journalist and frequent Rock Cellar contributor Steve Rosen interviewed Eddie Van Halen in 1978, just as Van Halen was on the cusp of releasing Van Halen II — and though the interview would go on to be “lost,” it was unearthed in early 2020 by Rosen and shared with the masses.

As a tribute to the late, great EVH, listen to the chat below.

More from Rosen, as featured in his Behind the Curtain piece detailing his relationship with Eddie:

When I first listened to the song and then the rest of the record, I just thought it sounded like Deep Purple on speed. Speed kings. I truly didn’t think it was that special.

But then I sat down and really started listening to it and realized in a moment that the parameters of electric guitar would forever be changed. The sound of Ed’s guitar was mesmerizing — it was huge and powerful and yet had so much character and definition. He would later describe it simply as the Brown Sound — meant to convey the idea of something organic, the wood itself crying — but every other guitar player recognized it as the, “Oh my god Eddie sound.”

I knew immediately that Eddie Van Halen was the most profoundly important guitar player to come along since the classic rock days of Ritchie Blackmore, Jeff Beck and Jimi Hendrix.

And when it finally dawned on me this was indeed the same guy I’d been talking to just a few weeks earlier, it was hard to make the connection.  That person at the Whisky had been humble, reserved, and soft-spoken. The cat on this record was a fire-breathing dragon, a high-flying eagle.