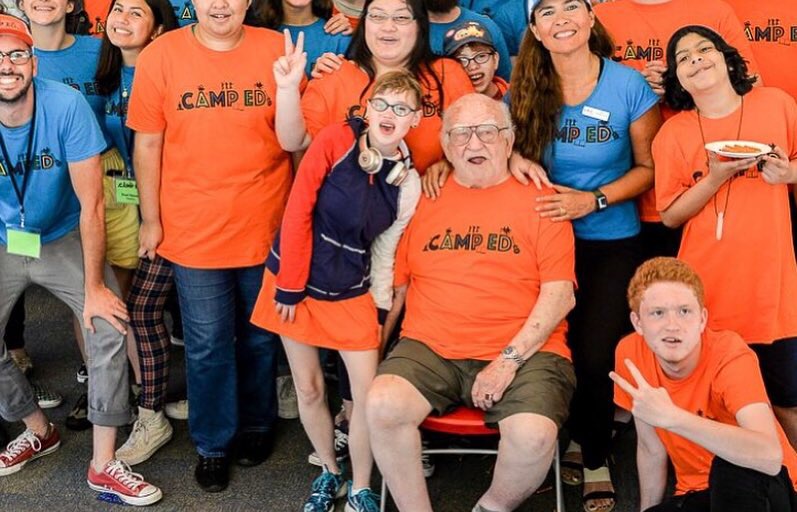 “To those who have been given much, much is expected.”

In our celebrity-worshipping society, some public figures who have attained fame, wealth and power use their privileged position for personal advantage. An example of this abuse of star stature are those celebs who traded on their influence to improperly arrange for admission of their children to universities via the “Varsity Blues” college admissions bribery scandal.

On the other hand, many prominent public-spirited people altruistically use their renown and success to endow and support charities, nonprofits, foundations and other philanthropic pursuits to benefit their fellow humans and our planet. One of those generous celebrities who has actually given his name to a 501(c)(3) nonprofit organization for special needs children and their families is Ed Asner, who has won more Primetime Emmy Awards than any other male actor in television history.

Asner won five of those golden trophies for his iconic role, the beloved but brusque newsman Lou Grant, first on CBS’ long-running popular 1970s’ sitcom The Mary Tyler Moore Show [see the intro to the beloved sitcom that ran 1970-1977 on CBS and then on the spinoff drama named after his character, Lou Grant. A pioneer in the mini-series genre, Asner also picked up Emmys for 1976’s Rich Man, Poor Man and in 1977’s landmark Roots.

His big screen credits range from an FBI agent in Oliver Stone’s 1991 thriller JFK to Santa Claus in the 2003 comedy Elf to voicing the curmudgeonly Carl in the 2009 Oscar-winning animated feature Up! to portraying a Holocaust survivor in 2020’s Tiger Within.

The five-time Golden Globe winner may have racked up 400-plus TV and movie credits, but he has been no stranger to live theater. In his late eighties Asner toured in the one-man show FDR, depicting his childhood hero, President Roosevelt. As he turned 90 the indomitable thespian portrayed the Almighty onstage in the political satire God Help Us! and toured America in the one-man comedy A Man and His Prostate.

A patron saint of progressive causes, Asner has been one of the Hollywood Left’s lions since at least the 1980s. When he was president of the Screen Actors Guild Asner rather famously clashed over Central American policy with U.S. Pres. Ronald Reagan, also a former SAG president. Asner has long maintained that that was the root behind the show’s cancellation, though CBS denied any connection to his political perspective.

It’s not surprising, then, that the actor/activist who has stood up for the oppressed is also bestowing the imprimatur of his name and celebrity status on an organization that fills a void for children on the autism spectrum plus other special needs youngsters and their families. Established in 2018, the Ed Asner Family Center is a nonprofit that’s largely privately-funded, supported in part by a variety of fundraising events. 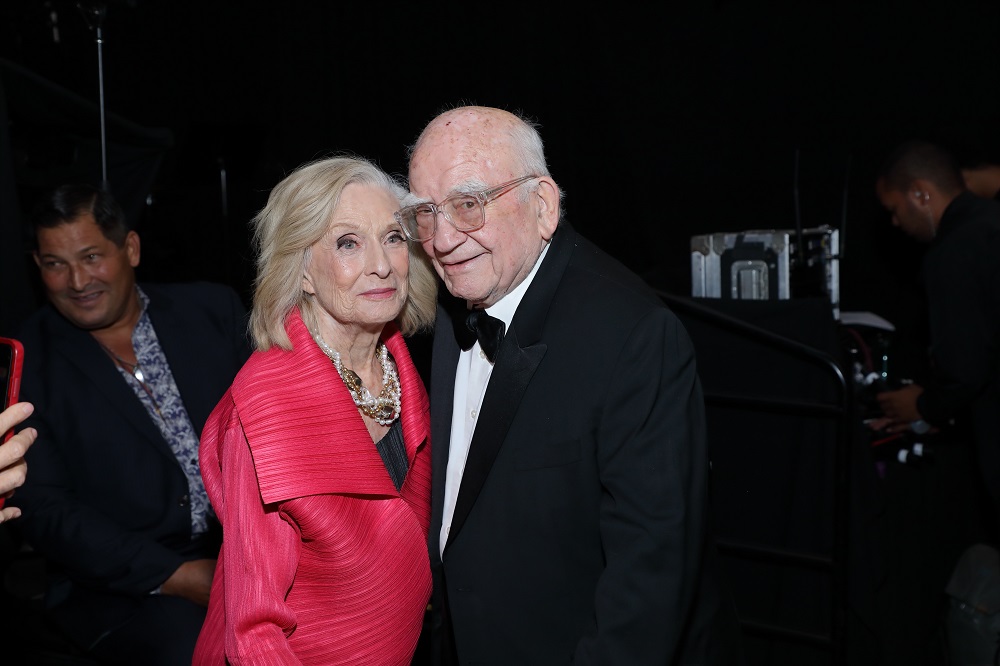 In this interview, the celebrated actor known for his gruff demeanor reveals that he actually has a heart of gold and discusses the Ed Asner Family Center. As does Ed’s daughter-in-law, Navah Paskowitz-Asner, who co-founded the EAFC with husband, filmmaker Matt Asner (and Ed’s son). Navah, who is part Navajo and Cherokee, is EAFC’s Executive Director, while Matt is its CEO. Navah founded Camp ED and is a mother, spokesperson, advocate and life coach for special needs families.

Navah was interviewed separately by phone and the interviews with her and Asner have been edited together for clarity and continuity, along with a couple of quotes from a previous print interview between Ed Rampell and Ed Asner (because two Eds are better than one!).

Rock Cellar: What is the Ed Asner Family Center?

Ed Asner: It’s a nonprofit. It’s a sorely needed institution — if only we can popularize it enough to get people aware of it. It serves a very useful purpose.

I have an autistic son, Charlie. My son [Matt] has an autistic son. People — I’m just amazed who’s attached themselves to autism. Aren’t you amazed at what you find?

Rock Cellar: I have to tell you the truth Ed, I don’t know much about the subject.

Ed Asner: It’s an evasive, elusive subject. And our purpose is to circulate and inform people who are puzzled by it — and who need help with it.

Rock Cellar: What does the Center do for families with autistic children?

Navah Paskowitz-Asner: EAFC is an all-inclusive — we call it an enrichment center, but it’s so much more than that … Imagine an old-fashioned community center. Within our facility we have enrichments, vocational, a whole mental health component and it’s all in one place in Reseda [in Los Angeles County] … We have a giant facility, we have a multi-purpose room that holds 750 people and a giant outdoor facility so the kids can go outside. We have a whole separate building where we have our counseling rooms; we have art rooms — we have a very large space so we’re able to do [activities] in a very socially distanced, safe way.

Together, Matt and I have three autistic sons, so that’s the basis and passion we had for having some place where our own kids could go and have fine art, music, dance and theater all under one roof. While at the same time the parents could have a counseling session or a support group, because for so many years, we couldn’t find something like that in our lives, when our children were growing up.

Ed is really our namesake. He has been involved in special needs advocacy and was proud to put his name to this … He absolutely has his whole heart behind what Matt and I have created.

Ed Asner: Matt and Navah have been running it. They’ve been producing effects. I’m quite pleased with their efforts, and what they have done.

Rock Cellar: What has it been like for the Center during the pandemic?

Navah Paskowitz-Asner: The last year has been so incredibly hard for special needs families. I can’t even tell you the challenges of being housebound with a special needs child — it’s unlike anything anybody can imagine. When you add the element of trying to get somebody with special needs to do an online learning program, it’s mentally broken a lot of our families. What we’ve been able to do and continue to offer for our community, to support our community, especially with our mental health division which has expanded 300% in the last year …

… We cater to about 300 families. We have a much bigger community now that we’re online as of March 2020 — all of our programs went to a virtual platform. We’re doing lots of the same programs, but only virtually. The only difference is when we went virtual we stopped charging. So, all of our virtual programs are free. Some via Zoom.

We have three live shows per week. We have a character art class, an arts and crafts class, and two different entertainment shows that we run. We have a staff of six … We did receive a PPP [the Paycheck Protection Program provides federal funding for small businesses] loan, thank God … we’re always applying for grants.

Rock Cellar: How else do you fund the Center?

Ed Asner: We put on a fundraiser, a special production of It’s a Wonderful Life. [See: (20+) Facebook]

Rock Cellar: That was an almost four-hour table read of the script of the 1946 Frank Capra classic starring Jimmy Stewart?

Carol Kane played Clarence [the angel originally portrayed by Henry Travers]. We went with a female this time.

Rock Cellar: She was Oscar-nominated for playing a Russian Jewish immigrant in the 1975 romance Hester Street, set on Manhattan’s Lower East Side in the 1890s.

Rock Cellar: Ed, did you play a character in the Center’s reading of It’s a Wonderful Life?

Ed Asner: I’ll nail your ass to the floorboards! [Laughter]

Navah Paskowitz-Asner: Since we’ve gone virtual, we’ve incorporated table reads as the entertainment for our galas. Our goal for this table read was to raise $100,000, and we exceeded that … We’re planning another table read for December [2021].

Rock Cellar: Your Center also does fundraising with the “Ed Asner & Friends Celebrity Poker Tournament.” Who are some of the celebrity players?

Rock Cellar: How about yourself? Are you quite the poker player?

Navah Paskowitz-Asner: Most of the time the poker tournament is an in-person event. Most of the players have no problem showing up if they can do it virtually from their bedrooms, so last year we had our biggest celebrity list we ever had [for the online version of the fundraiser] …  Our next poker tournament is coming up in June. Our goal is to raise about $100,000 … Clancy Brown [1994’s The Shawshank Redemption, 2017’s Thor Ragnorak] won last year.

One of our main fundraising goals is connected to Camp Ed [Camp ED – The Ed Asner Family Center]. We have seasonal camps and about 75% of our campers are scholarship, participants from low-income families … They’re called “expressive arts special needs camps.”

We have fine arts, cooking, a theater program during the summer. We have had three COVID-compliant [in person] camps … It was quite a feat, but we did it throughout the entire last year … Camp Ed starts in July but we are planning in person enrichments at the Center in April.

Rock Cellar: The Ed Asner Family Center also raises money for its enrichments, camps and mental health division with its online store. What kind of swag and merch can be purchased there?

Ed Asner: There are “You’ve Got Spunk!” T-shirts and mugs. It’s a quote from the hiring scene in The Mary Tyler Moore Show.

Rock Cellar: Do I remember correctly? When you as news director Lou Grant tell Moore’s Mary Richards that she’s spunky, she thinks you’re complimenting Mary and are going to hire her as a producer, but then you snap back: “I hate spunk!”

Ed Asner: Yeah. Which is a goddamn lie. Because I love spunk.

Ed Asner: Yeah. How could you not?

Rock Cellar: Ed, did you have a crush on Mary Tyler Moore?

Ed Asner: Oh sure. Who wouldn’t? WHO WOULDN’T?!

Rock Cellar’s new “Give A Little Bit” section is our way of highlighting prominent people who use their success to support charities, nonprofits, foundations, and other philanthropic pursuits to benefit their fellow humans and our planet.  We encourage you all to “give a little bit” to the organizations that these public-spirited individuals support.

Thanks to Roger Hodgson (Supertramp) for the song that inspired the title of the category.  If you have an idea for an individual or organization that deserves recognition, please contact us at:  info@rockcellarmagazine.com 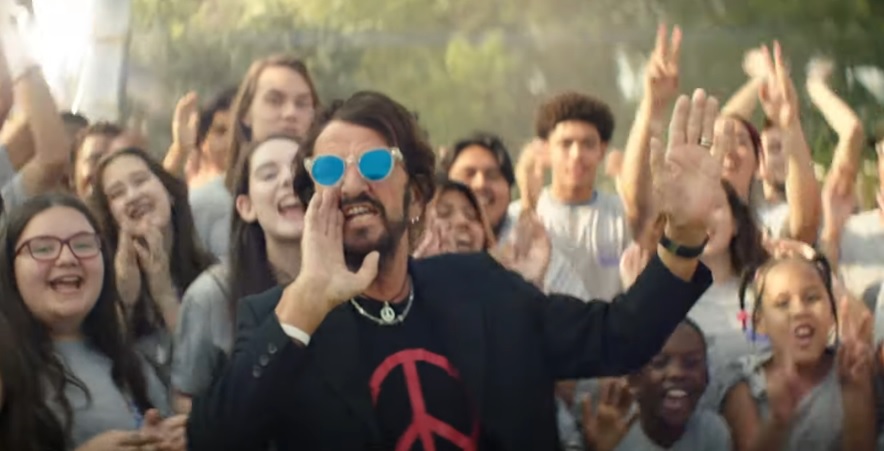