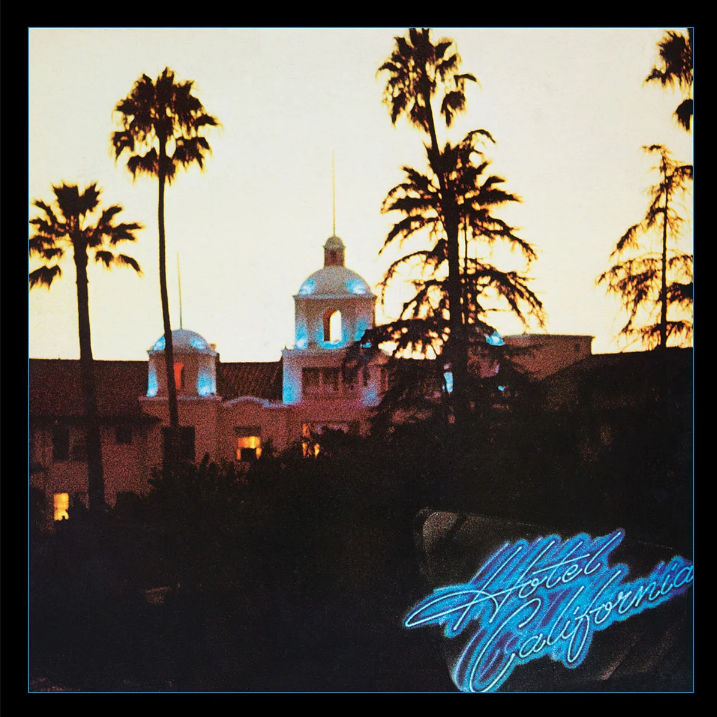 The Eagles recently issued a special edition of their album Hotel California to commemorate the 40th anniversary of the classic release. Here is my look back.

I’m quite certain that if you recited those five words to anyone, they’d know exactly what you were talking about. When words can instantaneously elicit a response or a feeling, a powerful statement is being made. And that’s exactly what the song and the album Hotel California was, and is, for me. But let’s backtrack a bit…

It was 1976, I was finishing high school and like most teenagers, I was totally unsure of what lay ahead. I was playing in garage bands, church choirs and experiencing mostly failed attempts at writing my own music. Also like many other teenagers, I was searching, questioning, and wondering what was out there for me. Music was my solace and where I found my peace.

It was a couple years earlier that I’d discovered the music of Jackson Browne and the Eagles – two artists that made me appreciate music that had meaning. These artists also had the “3 S’s” which I considered to be integral: they could sing, the wrote great songs, and those songs had great stories. Jackson’s 1973 album For Everyman was monumental, and by the time of One Of these Nights in 1975, I was fully hooked on the Eagles.

In those days, the lull between albums by bands could be lengthy and with news not readily available, that wait sometimes felt endless. So as One Of these Nights played into that restless summer of ’76, I started hearing quiet rumblings of a new Eagles album. Their record company, Asylum, fully aware of how long the wait could be, tried to keep the masses pacified by releasing Eagles: Their Greatest Hits 1971-1975 as a stop-gap. It would prove to be a brilliant stroke as it created even more excitement for that new album. It also increased my restlessness.

Now this was a time when ‘social media’ meant radio station DJs, and magazines. To calm my own impatience, I tried to read and listen to everything I could that offered a morsel of information on a new Eagles album. The lull ended in December 1976 when the first single “New Kid in Town,” dropped. It was worth the wait.

I was awestruck by the beauty of the melody, the brilliance of the vocals, and the perfect musical arrangement. Even my dad, who loved Country music, was a fan of the tune. “New Kid” was a huge success and did exactly what a lead-off single is meant to do – it teased the audience for the forthcoming album. Finally, two months later, in February 1977 (and two years in waiting), the album Hotel California was released.

I clearly remember cradling the album, being so wonderfully happy to finally hold a new Eagles album. Prior to listening to the music, I recall staring intently at the images in the gatefold, taking a magnifying glass to those images, wondering whether there was someone in that crowd of people that I would recognize. I was curious as to why the only lyrics reprinted on the inside cover were those of the title song. In time I’d understand why this song was worthy of singular recognition.

I listened to “New Kid in Town” again. This time within the framework of the other songs, it had a different feeling. Suddenly the sadness didn’t seem so passive. It was now front and center. Whatever the message, it clearly wasn’t a happy one. But I had more questions.

Why had the band (or the graphic designers) misspelled “benDs” (Mercedes BenDs) in the lyrics to the title song? Was “Life in the Fast Lane” really about what I thought it was about? Was there a deeper meaning to the historical references in “The Last Resort”?

While I questioned, I also savored. The musicianship on Hotel California stood out. From the brilliant guitar work, brimming strings, subtle yet oh-so-effective percussion, this band of musical perfectionists knew what they wanted and where it sounded best. There was also much thought that went into the running order of the songs. I loved how Side 2 (for you vinyl listeners) started with a “Reprise” of the last song on Side 1, “Wasted Time.” For me this was an ingenious way to continue the story that had just finished on Side 1. Then even with the overall somber tone of the album, the placement of “The Last Resort” as the closing cut was brilliant as it left you with wonderment but also with hope and promise.

In the end, everything led back to that majestic title song. The album was framed around this song, and it was obvious why its lyrics had been reprinted. From the mysterious words to the taut arrangement, it was unlike anything the band had done before. But what was the song about? I poured over every single word in every single line, and I still wasn’t sure. In 1976, I had a suspicion. Forty years later, I still don’t have a definitive answer. It remains a spellbinding piece of music.

The Eagles made tremendous musical strides in the two-three-year span between 1974’s On the Border to One Of these Nights to Hotel California. One Of these Nights felt like the pinnacle. Hotel California proved the bar could be raised even higher. It was the Eagles ‘top of the mountain’ and at the same time, their albatross. In the years that followed, the band would write more fine music, but they’d always be measured against Hotel. It’s a hard fight to win when you’re battling against your own art, especially when that art proves to be timeless and memorable.

So where am I going with all of this? I have thousands of albums in my collection, but very few that can instantly take me back to a specific time. While many of my remembrances are based on a nostalgic longing for a time that looks great in memories but not so good, when music can transport you, inspire you and maybe even change your life, it becomes something very important and powerful.