In a Father’s Day Essay, Dave Grohl Toasts the Man Who Helped Shape His Writing: His Dad, James Harper Grohl 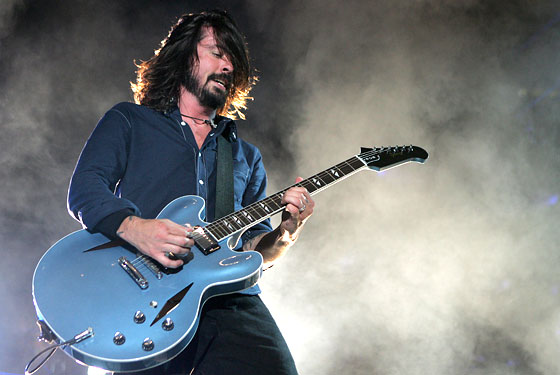 It’s been a while since Dave Grohl added to his Instagram account, Dave’s True Stories, with a detailed story from his life. Some of his previous entries have retold amazing experiences he had with the Foo Fighters, while others have dabbled in run-ins with his heroes like Prince and David Bowie.

An overarching theme of Grohl’s stories have been showing who he is a person, and what shaped him to become the man he is today, one of rock and roll’s living legends and a bona fide star of the highest degree.

As today, June 21, is Father’s Day, Dave Grohl published a new essay honoring, as he says, “a truly brilliant writer who shaped my love (and fear) of the written word. The man, the myth, the legend … my father, James Harper Grohl.”

Dave and his father are essentially polar opposites — or, as Dave puts it in his essay:

“How far does the apple fall from the tree? In my case, it not only ripped off the branch; it rolled all the way down the fuckin’ hill.”

James Grohl died in August 2014 at the age of 75, and it’s clear that Dave owes a great deal to his father as far as his writing skills are concerned. He expresses as much in this new essay.

A key element in the father-son dynamic that made up their relationship, Grohl says, was the degree to which they differed as individuals. Dave didn’t want to follow in James’ footsteps — he wanted to be a rock and roll star:

I had taken the hereditary generosity of my father’s musical abilities and mutated them into the antithesis of his classically trained ear. I was the garage band to his conservatory, the screeching feedback to his perfect pitch, the Dead Kennedys to his Leonard Bernstein. We may have shared the same passion for music, but eventually I swapped his trademark baton and Eames chair for my splintered drumsticks and leather jackets. Steeped in the DIY culture of underground, independent music, I wanted nothing to do with the convention and formalities of becoming a classical musician. I wanted noise. I wanted chaos. I wanted the sweat and grime of a crowded gig on a Saturday night, covered in bruises from slam dancing along to my favorite band. I wanted to scream my voice hoarse, break every drumhead, and celebrate the disregard of “proper” technique. I wanted maximum rock and roll.

After breaking the rules and staging a punk rock show with one of his teenage bands, young Dave received a stern rebuke from his father:

The dreaded “What do you want to do with your life?” lecture followed soon after dinner. A searing prosecution to which I had little defense. I was broken down and reduced to rubble, lowering my head in shame as my father delivered my sentence from his Eames chair. The verdict: a lifetime of mediocrity and squalor. It had become painfully clear to him that I did not want to follow in his footsteps, a bitter pill for any parent to swallow, so in his mind I was left with a hopeless existence as a failure. To him, my dreams were just dreams. Nothing more than fleeting illusions that fade away without a trace.

That rebuke led to young Dave writing a passionate letter to his father, a “searing rebuttal, unleashing 16 years of fury as my tears hit the page in blurred stains,” which began a new era for him and his father: One of mutual respect. It was that letter, that line drawn in the sand, Dave explains, that opened a new level to their relationship.

It’s one he still feels today, and with each personal essay released (and the consideration of maybe writing a book one day, Grohl owes it all to his dad:

During the pandemic lockdown, when I’ve had more than what I can generally tolerate of “downtime,” I’ve focused on a newfound pleasure in writing, telling various tales from my life. As I go over them from my own dreaded Eames chair with the proverbial red pen I inherited, I can’t help but think of my father, the journalist and master wordsmith. My father was my first, and best, reader. It was through him that I found my love of writing, filling me with the same sense of purpose and accomplishment that I felt that night at the Bethesda Community Center as a rebellious teen. So much that I’ve even contemplated trying my hand at writing a book someday. Imagine that. Just call it “kicking the apple back up the hill a bit.”

If only he were still around to read it.