Sad news hit the music community on Wednesday when it was announced that enigmatic and visionary songwriter/musician Daniel Johnston has passed away at the age of 58.

The Austin Chronicle reported that Johnston suffered a heart attack on Tuesday night that ultimately claimed his life, as confirmed by his manager.

Johnston was a cult favorite with fans the world over, including high-profile boosts from the likes of Nirvana front man Kurt Cobain, who took to wearing a Johnston t-shirt in tons of promotional photos in the early 1990s, when Cobain’s band was the biggest thing in the world. 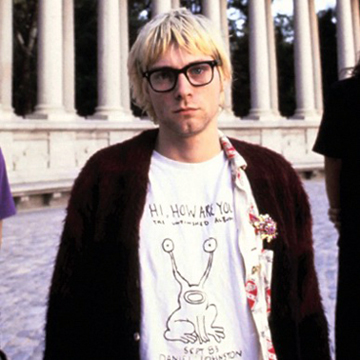 That shirt depicts Johnston’s 1983 album, Hi, How Are You:

Johnston’s life and career, which included significant struggles with mental health issues over the years, was the focus of a documentary titled The Devil and Daniel Johnston, released in 2006:

For a clear example of the lasting influence Johnston’s music and spirit had on people, here’s a Twitter thread from writer/poet Hanif Abdurraqib that explains it rather well:

I'm so thankful for the ways Daniel Johnston's work continually explored the ways that any pursuit of love can be woven into the fabric of a person's sanity, comfort, and well-being. And the fact that the pursuit of love doesn't owe us anything at the end.

It is hard work to repeatedly commit yourself to unraveling/articulating the demons you didn't ask for, but got stuck with anyway. I hope to never take it for granted when artists choose to thoughtfully and generously undertake that work. I'll miss Daniel Johnston.

More on Johnston, via the Austin Chronicle’s news piece announcing his passing:

Last year, his sister Margy Johnston told the Chronicle that Daniel had recently endured a rough go that included falling, hospitalization, and frequent adjustments to his medication. In January, while famous fans like the Flaming Lips and Yo La Tengo were covering his songs at ACL Live at the Moody Theater for the second annual Hi, How Are You Day, Daniel landed in the hospital again.

Johnston, who was raised in West Virginia and moved to Austin in the early Eighties, counts 17 full-length albums of original music, including an incredible trio of home-recorded tapes from 1983: More Songs of Pain, Yip/Jump Music, and Hi, How Are You. He has at least one more LP of original music that’s yet to be released.