Home / Country Joe & The Fish – The Greatest Protest Song of the ’60s? (Interview)

Country Joe & The Fish – The Greatest Protest Song of the ’60s? (Interview) 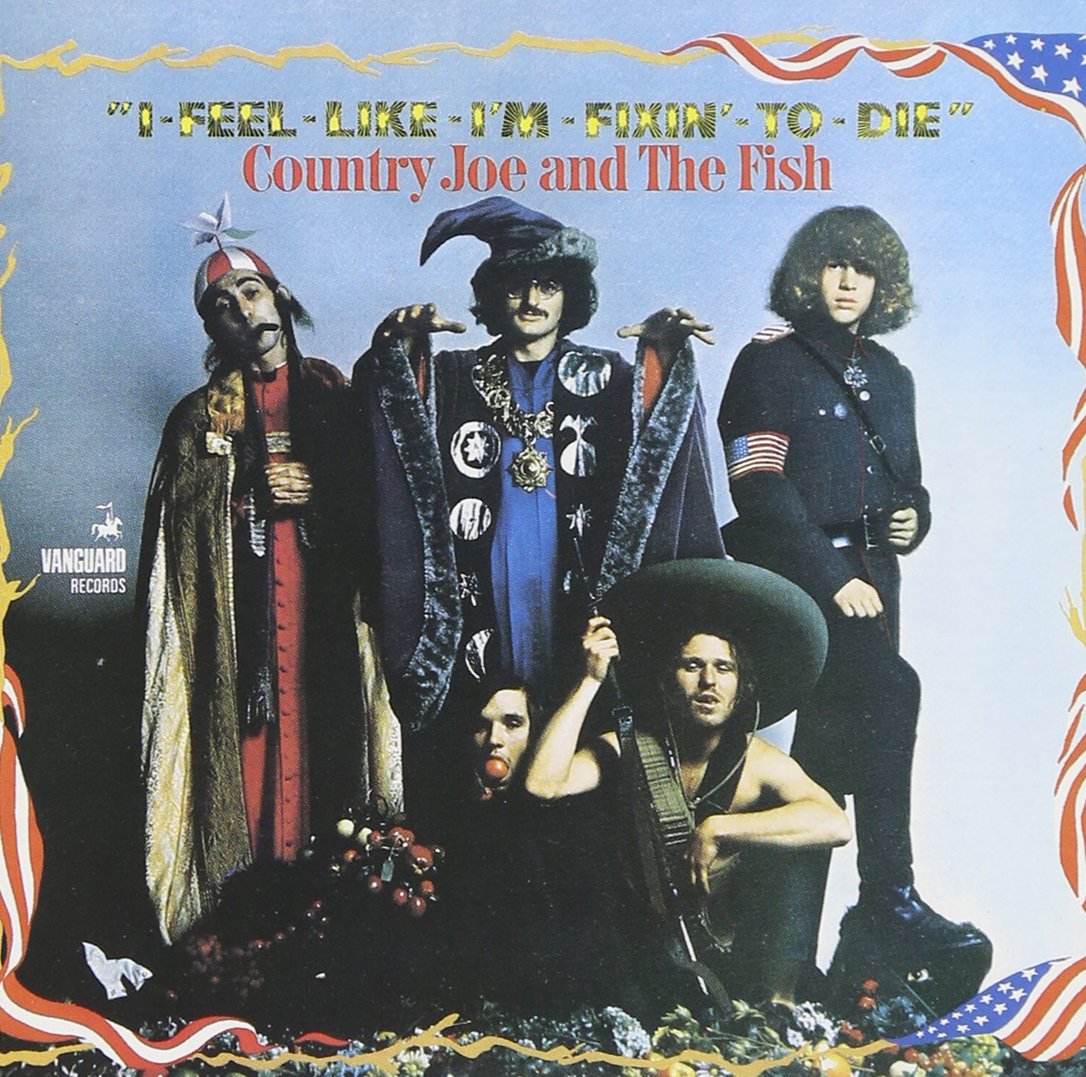 As the Vietnam War escalated in the mid-1960s and more young men were drafted into the military, protest songs became more mainstream.  Once a staple of folk music, like Phil Ochs’ I Ain’t Marching Anymore, anti-war songs like Barry McGuire’s Eve of Destruction now hit number one on the Billboard charts.

The song is written in the voice of a military recruiter/carnival barker (with an outrageous hurdy-gurdy organ accompaniment) who encourages young men to join the fight, then invites parents to be the first to “have your boy come home in a box.” Its chorus: “Whoopee! We’re all gonna die.”

In an interview with Rock Cellar Magazine, Country Joe McDonald, a Navy vet, said he wrote the song in 1965 for a play about the Vietnam War. 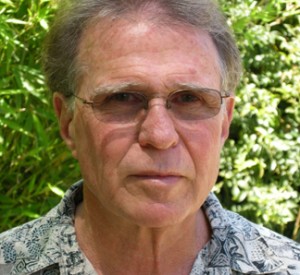 Country Joe McDonald:  I just strummed a pattern on my guitar and all of a sudden scribbled out “One, two, three, what are we fightin’ for?” Within 30 minutes at the most I wrote Fixin’-To-Die Rag.

Rock Cellar Magazine: Most of the protest songs of the ‘60s were serious, scolding songs like Eve of Destruction.  But Fixin’-To-Die had a funny, sarcastic tone.  Were you tempted to write something more serious?

CJM:  I had written songs about the military before that. At least one I remember was serious in that vein.  The big difference with Fixin’-To-Die Rag is that it’s not anti-soldier, it’s from a soldier’s point of view.  I had been in the military.  The humor is what we call “GI Humor;” black humor.

CJM:  I was in the high school band and we used to play at sporting events and the cheerleaders would always spell out the name of the team.  And I remembered that.  When were in the studio in 1967 recording I-Feel-Like-I’m-Fixin’-to Die Rag for Vanguard Records, I got the idea that we should give a cheer for ourselves and spell out “Fish.”

There were five people in the group so we each yelled out a letter and then the last person yelled “What’s that spell?” and we overdubbed a crowd cheering “Fish!” and that became known as the Fish Cheer.

And then in 1968, playing the Schaefer Beer Festival in New York’s Central Park, the drummer [Gary “Chicken” Hirsh] got the idea that we should change the Fish Cheer to the “Fuck Cheer.” And from then on we continued to do the Fuck Cheer.  And there were repercussions over that.

RCM: What were some of those repercussions? 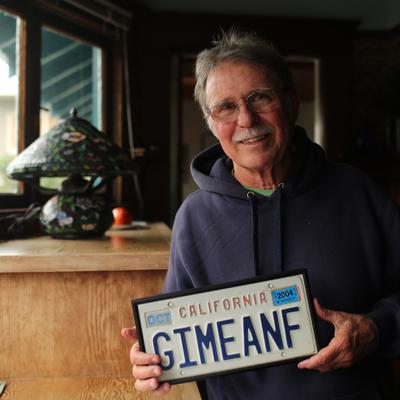 We performed the Fuck Cheer in Worcester, Massachusetts in 1970 and there was a warrant for my arrest issued.  I had a trial over me leading the crowd in a lewd and lascivious and wanton cheer.  It was later thrown out of court.

RCM: Tell us about Woodstock.

CJM:  I was asked one day to just fill in some time on stage because Santana couldn’t get their equipment there on time to go on.  They gave me a guitar and I just went up there and after a while I decided that I would do the Fuck Cheer and Fixin’-To-Die Rag and fill in some time for the program.  And it was filmed and it was put onto the record and into the movie. Country Joe and the Fish had been hired to perform, I wasn’t scheduled to do anything solo.  And that was the event that launched Fixin’-To-Die into the mainstream along with the Fuck Cheer. 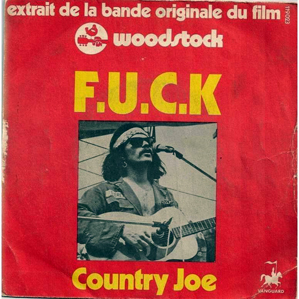 For FCC reasons, of course, it can never be referred to on sound media as the Fuck Cheer so it’s always referred to as the Fish Cheer, which has also caused some amusing problems at times over the years.
A couple of people were fired over playing the track on the Woodstock album because it just said Fish Cheer. They just dropped the needle on it and then “fuck” played out over the airwaves.  That happened quite a bit.  It’s ironic that my most well-known song and performance is unplayable on the radio.

RCM:  Tell us about that Vanguard recording session.  It sounded like a pretty loose affair. Who had the inspiration to use the hurdy gurdy organ and the kazoos?

CJM:  That was me.  We just threw crazy shit in there.  Country Joe and the Fish were pretty good at being comedic and sometimes it was lame but it that particular case it just seemed to work pretty good.

RCM:   What was the reaction to the song?  You must have gotten some flak.

CJM:  We performed the song on the David Frost TV show and they got a lot of letters from people saying that we should be sent to Russia, that we’re disgusting, that “bring your boy home in a box” was unspeakable, and they’d never watch his show again.  We live in an era now of post-punk and thrash and rap and of sarcasm and cutting-edge humor on television.  But at that particular time it was really shocking.  It was blasphemous to have that kind of an attitude towards our noble dead who have sacrificed so much for us. 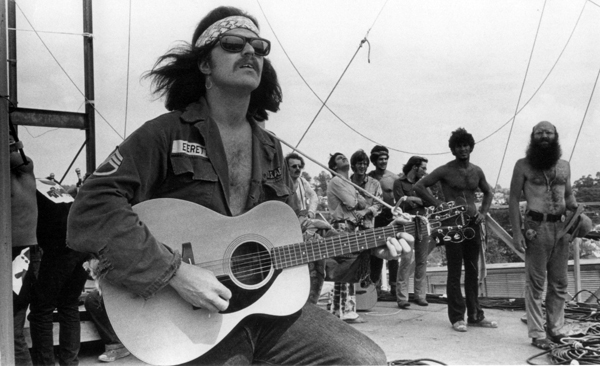 LYRICS: I-Feel-Like-I’m-Fixin’-to-Die Rag
Come on all of you big strong men,
Uncle Sam needs your help again.
He’s got himself in a terrible jam
Way down yonder in Vietnam
So put down your books and pick up a gun,
We’re gonna have a whole lotta fun.
Chorus:
And it’s one, two, three,
What are we fighting for?
Don’t ask me, I don’t give a damn,
Next stop is Vietnam;
And it’s five, six, seven,
Open up the pearly gates,
Well there ain’t no time to wonder why,
Whoopee! we’re all gonna die. 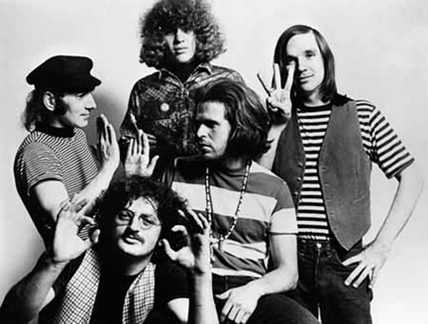 Come on generals, let’s move fast;
Your big chance has come at last.
Gotta go out and get those reds —
The only good commie is the one that’s dead
You know that peace can only be won
When we’ve blown ’em all to kingdom come.
[Chorus]
Come on Wall Street, don’t move slow,
Why man, this is war au-go-go.
There’s plenty good money to be made
Supplying the Army with the tools of the trade,
Just hope and pray that if they drop the bomb,
They drop it on the Viet Cong.
[Chorus]
Come on mothers throughout the land,
Pack your boys off to Vietnam.
Come on fathers, don’t hesitate,
Send your sons off before it’s too late.
You can be the first one on your block
To have your boy come home in a box.
[Chorus] 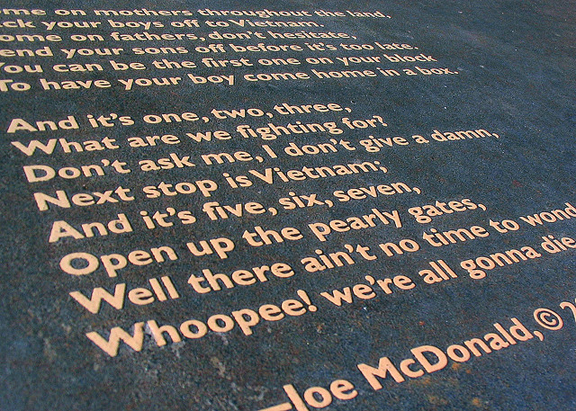 I really don’t think that civilians in general understand the military mindset.  I haven’t met any military people who had any problem with “be the first on your block to have your boy come home in a box.” For combat veterans, that’s just shop-talk.  But for civilians, who like to think that war is a noble cause and most people in combat are there because they wanna be and they’re patriotic, it flies in the face of that mythology, which is still active and alive today. 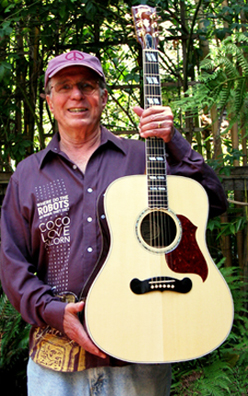 RCM: Did people think you were anti-soldier with the song?
CJM:  I think that most people who’ve been in the military recognize the attitude of the song.  I don’t think military interpreted it as being anti-military because the song was actually taught as a boot camp song in the Marine Corps for some time.

And lots of people sung it in-country in Vietnam.  I heard dozens and dozens of stories of people singin’ the song and it was embraced.  The career people in the military, lots of them, hated the song because it brought with it a bad attitude.  An attitude that you’re not supposed to have.

A real protest song is never gonna get mainstream acceptance because it’s an offense to the majority.  Pussy Riot, the group that has been jailed in Russia, that’s real protest — where you sing a song and they arrest you.  But nowadays, Green Day’s American Idiot becomes a mainstream hit and a Broadway show.

Fueled by Social Unrest and Protests, Rage Against the Machine Albums Have Re-Entered the Music Charts