Being a member of the Foo Fighters, one of the world’s biggest rock bands, helps swing open some pretty wide doors. When he’s not recording and touring the globe, shredding on lead guitar alongside Dave Grohl and the Foos, Chris Shiflett forges a solo career and most importantly, is able to do it on his own terms, following his muse wherever it leads and not having to kowtow to commercial restraints/expectations.

Hard Lessons, Shiflett’s new solo album rooted in a fiery hybrid of rock and country twang, rings true with the voice of a shining talent.

Rock Cellar: Given your new album is titled Hard Lessons, what were the “hard lessons” you learned in your career, both pre-Foo Fighters and after joining Foo Fighters, that put you a step ahead of the game as a solo artist? 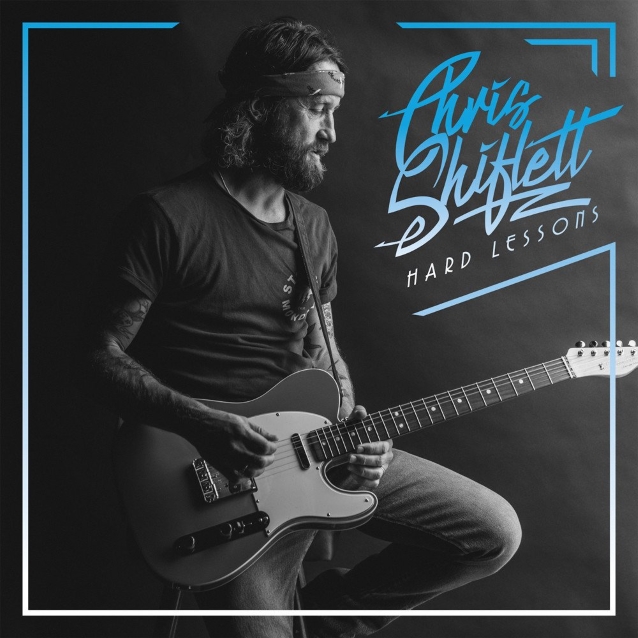 Chris Shiflett: Well, that’s a tough one. As a musician you’re always evolving and growing and changing and learning, and certainly making these couple records with Dave Cobb down in Nashville has been a huge step for me personally and as a recording artist.

But I think as far as being a band member over the years, if there was a lesson I’d pass on to you and upcoming musicians is, do the fuckin homework! That’s the best thing you can do, show up ready to roll.

I think that’s why I got the gig in the Foo Fighters. I learned the fucking songs. I showed up ready to go and could have played a gig that night. I encounter my fellow musicians all the time and it never ceases to amaze me how people don’t do the prep.

Chris Shiflett: Well, you know when I was a kid I had older brothers with really good record collections.  We were a real music-centric family, so that was always what we kind of cared about.  I didn’t follow anything else; it was just about rock bands and rock music. But it wasn’t until I started playing guitar at 11 and hit my teenage years when I first had the dream of wanting to move to LA and make it and be a professional musician.

It’s funny you asked what I wanted to be then, since I was a stupid kid not knowing anything (laughs) but it’s nothing like your life is now.

It’s great doing this, but when I was a little kid I wanted to drive in a Lamborghini and drink champagne all day. I just wanted to be in Motley Crue or something. (laughs)

But then music evolved, and I evolved, and now I probably have a lot more in common with my dad than the dream I had of being some kind of rock star when I was a little kid. My main thing is I always wanted to play music every day, and I wanted music to be my life, and it is and has been for a long time. Whether it’s doing my little solo gigs or playing on big stages with the Foo Fighters, I get to do this as much as I want to do it.

People always ask me, “Why do you bother to go on these little solo tours when you’re in this big band?” But this is what I want to do, and I feel lucky that I have the opportunity to do that. I would look back on my life and regret not having hustled and worked hard and taken advantage of that.

Rock Cellar: In today’s ADD-afflicted society you often have very little time to capture someone’s attention. Not with the dedicated fans that will take an interest in your solo work because of your connection with the Foo Fighters, but for everybody else: if you’re able to capture someone’s attention for five minutes, what’s the track on the album you want to play them that would give them a good idea who you are as an artist?

Chris Shiflett: Well, the one that is sort of like the quote unquote single is “Welcome To Your First Heartache.” It’s probably the poppiest and hookiest song on the record. But you know, if its guitar player kids you’re trying to reach for me it’s probably “This ‘Ol World,” half the song is guitar solo. (laughs) That song was an excuse to just play guitar solos.

Rock Cellar: When sitting down to write the songs for your solo record and recording them in the studio, are you thinking of the audience and trying to deliver something that they will embrace, or are you just doing things to please yourself in hopes that if you like it others well?

Chris Shiflett: I’m actually thinking the opposite of that.

No one is ever gonna buy this record, so I might as well make it something that I like. I’m not writing or trying to have a big giant pop hit. Those sorts of ideas don’t go through my head. That stuff is never gonna happen.

Chris Shiflett: Yeah, certainly not with the idea of getting anything on the radio. The radio doesn’t play into the kind of music that I make. If that was what I was trying to do I’d be taking a very different approach. We’re living in an interesting time for people like me whose music is guitar, bass and drums, that’s kind of going the way of the dodo. That’s definitely not what’s happening in the mainstream.

Rock Cellar: The art of learning how to play an instrument is going by the wayside.

Chris Shiflett: Yeah, it’s tough to say. These things change so much over time. There used to be a different model when I came up playing in the ‘80s and through the ‘90s. But when I read a Buck Owens biography and people of that era and the work that they out in playing live, all night, seven nights a week in honky tonks for hours and hours and hours, that makes me feel like I didn’t do things the right way, you know what I mean?

Rock Cellar: Growing up, was there a mentor for you and music and is there one for you today?

Chris Shiflett: I grew up in an area where there were a lot of bands and a lot of people playing instruments, my brothers played guitar and bass. So there were a lot of mentors; my brothers were mentors, all the other kids on my local music scene were mentors and then there were some older musicians around town that we learned a lot from too. I can’t really point to one. I had some great guitar teachers along the way. Where I lived and the time I grew up there it was a very vibrant music community.

Rock Cellar: In your formative years as a musician, was there a guitar solo you looked at being something that was very difficult that you hoped to one day master?

Chris Shiflett: The solos that were really good, by Eddie Van Halen and Randy Rhoads, I couldn’t touch. I couldn’t get anywhere near it. It was guys like Ace Frehley who were ripping guitar players but not so fast and crazy and technical. That seemed a little bit more achievable.

Ace is my favorite guitar player of all time and is my primary influence. When I was a kid I was obsessed with KISS. I actually met Ace last year and had him on my podcast and got to ask him a million questions and it was great. I’m a massive, massive fan.

Rock Cellar: The whole paradigm of the music business has changed dramatically in the past 10 years. Since you gained a foothold in the business as a member of the Foo Fighters, do you think it’s easier or more difficult to achieve success as a new artist today?

Chris Shiflett: I think it’s harder. For me, when I first was touring and making records with this other band called No Use For A Name in the mid ‘90s, we were on an indie punk rock label and they wouldn’t give you tour support, they would give you all the CDs you wanted and you would take those CDs and sell them at your shows and that was pretty much like de facto tour support; that an t-shirts was how we survived. (laughs)

The fact that you don’t have physical album sales to fall back on for young bands, I imagine it’s a lot harder. The world is a more expensive place and wages haven’t gone up for forever for people and everything’s more expensive. It’s not like it wasn’t hard work back then, but I was always able to get more jobs pretty easily when I ran out of money in my twenties. I’d come home from tour and maybe a few months later I’d run out of money and I’d get a job in a pizza store or a coffee shop. It’s not like I was getting rich but I was getting by and enjoying myself and surviving doing music felt more attainable. I was working most of the time as a musician. I’m not 23 anymore, so I don’t know what that feels like for a young musician just starting out but it seems like it’s harder now.

Rock Cellar: What’s the last song someone wrote where you said, “Damn, I wish I wrote that?”

Chris Shiflett: Oh man, there’s some really good ones on the new Hayes Carll record. He’s a fantastic songwriter and he put out a record last year that is so good. It was probably my favorite record of the year.

Rock Cellar: What’s the first album you bought with your own money?

Chris Shiflett: Double Platinum by KISS. That was the first one where I took my seven dollars down to the record store and used it to buy an album. I wasn’t that young at that point. For a long time I didn’t have to buy any records, because I had access to my brothers’ records. I was ten or eleven years old before I actually started buying my own records.

Rock Cellar: Given that you bought KISS’s Double Platinum album, which has the remake of their song “Strutter” as “Strutter ’78,” where do you stand, original version? Or is the Double Platinum version better?

Chris Shiflett: Man, that’s a tough call but there’s something about “Strutter ‘78” that I just love.

Rock Cellar: There’s a cool vibe to “Strutter,” it has a little bit of a disco cocaine vibe.

Chris Shiflett: (Laughs) Oh yeah … Totally. I think they added a shaker to it. I don’t think it’s a four on the floor groove and also the live version of “Strutter” on KISS Alive! is great as well. Let’s not forget that.

Rock Cellar: With the Foo Fighters, you’ve had the experience of jamming with some amazing superstars, members of Queen, Led Zeppelin, Paul McCartney and others. For you what was the biggest “pinch me” moment?

Chris Shiflett: Without question, when we got to back up Mick Jagger on Saturday Night Live. That was the biggest thrill of my life. That would be hard to top for me.