Home / COVID-19 Vaccines: Should Americans Get Inoculated When/If a Coronavirus Shot is Made Public?

Remember when they said it would be "15 days to stop the spread" ? They really meant ..Forever. pic.twitter.com/tBDHQhmUGh

COVID Vaccines: Should Americans Get Inoculated When/If a Coronavirus Shot is Made Public?

PRO Take a shot on the shot:

Good news for modern man: Science will save us from the plague.

Operation Warp Speed appears to be bearing fruit in record time. On November 9 Pfizer and the German immunotherapy manufacturer BioNTech declared their “Vaccine candidate was found to be more than 90% effective in preventing COVID-19.” Moderna and Oxford University’s AstraZeneca quickly followed suit. On November 25 the White House Coronavirus Task Force’s Admiral Brett Giroir promised “a vaccine is just around the corner… the end of the pandemic is in sight.”

Asked if there was anything “political about Operation Warp Speed? Politics is all over this. I wonder how you deal with political decisions that you disagree with?” Operation Warp Speed’s chief scientific adviser, Dr. Moncef Slaoui, insisted: “I would immediately resign if there is undue interference in this process.”

Regarding the sensitive subject of Trump administration pressure influencing their vaccine research, “the CEOs of AstraZeneca, BioNTech, GlaxoSmithKline, Johnson & Johnson, Merck, Moderna, Novavax, Pfizer and Sanofi vowed to not seek approvals or emergency use authorizations for their vaccine candidates without conclusive positive data. The drugmakers will ‘only submit for approval or emergency use authorization after demonstrating safety and efficacy through a phase 3 clinical study that is designed and conducted to meet requirements of expert regulatory authorities such as FDA,’ they said on September 8.

Sparring with Senator Harris during their debate, White House Coronavirus Task Force chair Vice President Mike Pence admonished: “The reality is that we will have a vaccine, we believe, before the end of this year, and it will have the capacity to save countless American lives. And your continuous undermining of confidence in a vaccine is … just unacceptable.”

Among those who stand to benefit most from vaccinations are minorities, who have been especially hard hit by the plague. “The inclusion of Black people in trials for a highly anticipated drug might seem like a no-brainer, particularly for a vaccine to fight COVID-19, a contagion that’s been killing Black Americans at a rate higher than whites. Indeed, PhRMA, the drug industry’s influential trade group, just announced a new set of principles that urge diversity in human trials for new drugs to boost health equity, increase participation by people of color, ensure drug effectiveness” (From Tuskegee to COVID: Diversity, Racism Are Hurdles in Drug Trials | Healthiest Communities Health News | US News).

Early in the pandemic President Trump took decisive steps, including China and Europe travel bans, then went on to streamline and fund the federally-backed vaccine creation process, which he called “Operation Warp Speed.” That means big, and it means fast – a massive scientific, industrial and logistical endeavor unlike anything our country has seen since the Manhattan Project.”

The name “Operation Warp Speed” seems inspired by sci-fi spacecraft traveling faster than the speed of light in Star Trek and Isaac Asimov books. But unlike FDR’s Manhattan Project, instead of unleashing the destructive, apocalyptic power of the atom, Trump’s Hail Mary pass may rescue us from the plague besetting mankind and return us to health.

During the Age of Reason, French-born scientist/philosopher René Descartes pointed out in his 1637 Discourse on the Method what sets humans apart from other creatures when he wrote the immortal words: “I think, therefore I am.” In the 18th century the great German Enlightenment philosopher Immanuel Kant observed: “Science is organized knowledge. Wisdom is organized life.” Centuries later, theoretical physicist Stephen Hawking noted: “Scientists have become the bearers of the torch of discovery in our quest for knowledge.” Ending the pandemic can open up new possibilities, giving the world’s people a second chance.

In 1940, when the human race was arguably at its lowest point, Charlie Chaplin closed his classic film The Great Dictator with a clarion call for hope: “To those who can hear me, I say – do not despair … You, the people, have the power to make this life free and beautiful, to make this life a wonderful adventure … Let us fight to free the world … Let us fight for a world of reason, a world where science and progress will lead to all men’s happiness… let us all unite!”

As the virus ravages the land, on Nov. 18 National Institute of Allergy and Infectious Diseases director Dr. Anthony Fauci said about the promising vaccines: “Hang on … Help is really on its way.” Behold: Humanity’s ingenuity and science will be our saviors.

CON COVID-19 vaccines may be unsafe:

As of this writing we’re being told the anti-corona cavalry is on the way starting December 10-ish in the form of vaccines created by Pfizer, Moderna, AstraZeneca, etc. Nevertheless, despite the heartbreaking pandemic-related deaths of 260,000-plus people in the United States, millions of Americans are doubtful about being inoculated for immunity if/when FDA-approved vaccines are made publicly available. According to polls, in “mid-September … just 50% said they would get vaccinated,” while a November survey found: “Most Americans won’t get a COVID-19 vaccine unless it cuts risk by half.” Given that the U.S.A. has experienced the highest number of COVID-19-related deaths in the entire world, why is vaccination skepticism so widespread?

Motives range from the cautious to the wild-eyed. From his Inaugural Day crowd size to who won 2020’s election, Donald Trump is the most documented liar in human history, averaging “50 false or misleading claims a day,” for a total of 25,000-plus whoppers during his presidency. He’s also a climate change-denier who disastrously bungled federal government pandemic response, unable to protect his wife, sons or himself from getting infected.

Vaccination opposition spans the spectrum. Anti-vaxxers dubious about science spew conspiracy extremism. According to The Guardian: “The QAnon theory now connects antivaccine, anti-5G conspiracies, anti-Semitic and antimigrant tropes, and several bizarre theories that the world is in the thrall of a group of pedophile elites set on global domination in part aided by ritualistic child sacrifice.”

But not everybody questioning the vaccine is a rightwing crackpot. Some sober-minded people predisposed to the scientific method doubt “Operation Warp Speed,” suspecting it’s produced by a warped mind for whom haste is waste. On November 9, Public Citizen, the organization consumer advocate Ralph Nader founded, contended: “The release of preliminary and incomplete clinical trial data by press release to the public is bad science” and called for trial results to be “independently reviewed and scrutinized by staff at the U.S. Food and Drug Administration and the independent experts.”

During October 7’s Salt Lake City vice presidential debate Democratic contender Senator Kamala Harris asserted: “If the public health professionals, if Dr. Fauci, if the doctors tell us … we should take [the vaccine], I’ll be the first in line to take it. Absolutely. But if Donald Trump tells us … we should take it, I’m not taking it.”

This is presumably because the egregiously incompetent, dishonest con man-in-chief, who has botched almost everything else regarding federal pandemic response, may be presiding over a rush job releasing half-baked, unsafe serums, etc., in an effort to secure his seat in the White House and/or place in history.

The abusive Tuskegee syphilis study that began in the 1930s, plus other medical outrages perpetrated against Blacks, caused a lingering legacy of mistrust among African Americans. The son of a liberal icon, Robert Kennedy Jr., is one of the “Anti-vaccine heavyweights”.

According to Canada’s Globe and Mail, “To the consternation of public-health officials, Mr. Kennedy Jr. and other high-profile anti-vaxxers are increasingly refocusing their attention on COVID-19 … Mr. Kennedy Jr. has implied that Mr. [Bill] Gates and Dr. Anthony Fauci, America’s top infectious diseases expert, have an economic interest in promoting vaccines for COVID-19.”

Hawthorne Strategy Group CEO Cynthia McCafferty commented: “Much like the little boy in the story, when you cry wolf over and over again, people begin to tune out, even if you are the President.”

The moral of the story is Don-the-Con’s “alternative facts” and hoax-crying has damaged his credibility so irreparably that the man who suggested – on live TV! – injecting disinfectant could be a COVID cure is widely regarded as inherently incredible. As Aesop’s Fable put it: “Liars are not believed even when they speak the truth.” So, can you really blame people for taking an “I’ll-believe-it-when-I-see-it?” attitude when it comes to any Trump promise?

Another rationale for resisting possible COVID vaccines could be the refusal by some fanatical anti-Trumpers to give him any credit for a cure. However, according to Bob Woodward, Trump actually didn’t initially push vaccine development, preferring quackery such as hydroxychloroquine instead. Ironically, The Donald’s foot-dragging might have affected the presidential race’s outcome, because Pfizer and BioNTech didn’t announce their vaccine candidate’s efficacy until after the election. 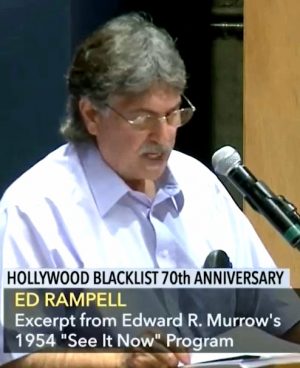