Home / Concert Review: Blink-182 + Lil Wayne (and Neck Deep) at the Forum in Los Angeles — A Mix of Styles That Worked Surprisingly Well

Concert Review: Blink-182 + Lil Wayne (and Neck Deep) at the Forum in Los Angeles — A Mix of Styles That Worked Surprisingly Well 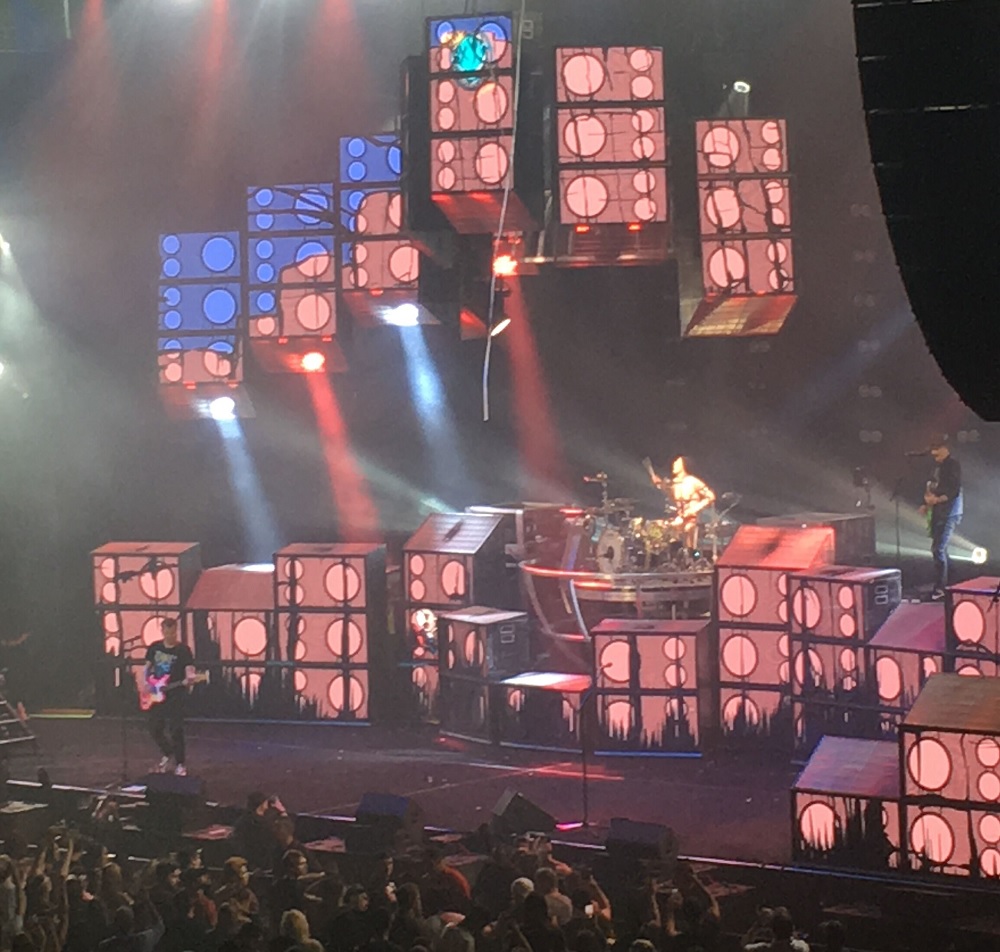 When you first hear it, the pairing sounds odd. Blink-182, the veteran alt/punk band known for sophomoric humor and their late ’90s-early 2000s brand of catchy pop/punk and iconic rapper Lil Wayne, on tour together? In 2019?

The tour’s been going on for a few weeks now, and it rolled into Los Angeles on Thursday night for what actually turned out to be a pretty excellent time. This was a bit of a surprise to this reviewer, having heard early reports from the tour of Wayne ending his set early and/or seeming to have issues with crowd reception.

Perhaps because this was the Forum in Los Angeles, everything went over well on Thursday — and the result was a genre-mashing good time for everybody, from the general vibe of the building.

Opening the night before Lil Wayne and Blink-182 was Neck Deep, a young U.K. pop-punk band with a few albums under its belt and a Warped Tour fan base. Their energetic but short set was received well, though many fans weren’t in the arena just yet as it was barely 7 o’clock. Still, front man/vocalist Ben Barlow opted to wear a Nirvana In Utero t-shirt, which was especially amusing when Neck Deep launched into its song “In Bloom.”

I appreciate @NeckDeepUK introducing themselves to those unfamiliar with their stage backdrop. pic.twitter.com/BHrZdsuboZ

The obvious tie-in to an opening slot for Blink-182 was the band’s pop-punk sound, and it was a great way to start the night.

The man they call “Weezy” was up next, and after what felt like 20 minutes of his DJ hyping up the crowd, the man showed up on stage in bright pink pants. For about an hour, he led the charge through several of his best-known songs and at least two earnest shout-outs to beloved Los Angeles rapper Nipsey  Hussle, who was murdered on March 31, rattling the hip-hop community.

Taking the stage to “6 Foot 7 Foot,” Wayne bounced around with a noted enthusiasm, most likely motivated by a very lively crowd. Fans were dancing in the aisles and singing along to nearly every song delivered by Wayne and his crisp backing band, which included a guitarist, bassist and live drummer in addition to his DJ.

Given the headlines about this tour and the apparent mismatched crowd that it’s seen in some cities, everything went off without a hitch regarding Wayne’s reception in L.A. — and he even tossed in a short snippet of Lil Nas X’s runaway hit “Old Town Road,” for good measure.

Blink-182’s set, on the other hand, might be a bit tough to compare to other stops on this tour because bassist/vocalist Mark Hoppus, drummer Travis Barker and guitarist/vocalist Matt Skiba (filling in as he’s done for a few years now for Tom Delonge) brought out several friends during their headlining set.

The scope of this tour is celebrating the 20th anniversary of Blink-182’s now-classic 1999 album Enema of the State, which turned them from “upstart pop/punk band” to one of the biggest groups on the planet, thanks to “What’s My Age Again?” and “All The Small Things.”

One of the most intriguing aspects of Skiba, otherwise known for his work fronting Alkaline Trio, taking over for Delonge as he spends time away from Blink-182 investigating extraterrestrials in his To The Stars … Academy of Arts & Science and touring/recording with his other band Angels and Airwaves, is tackling the songs normally sung by Delonge.

Anybody who’s listened to Blink-182 has heard Delonge’s voice, as his is the lead vocal on many of their hits, delivered in a nasally, high-pitched register that helped give Blink-182 its identifiable sound. Skiba does a fantastic job tackling these songs, though it’s apparent it’s a lot of work.

Enema of the State, as mentioned here in another piece about its 20th anniversary, is a snapshot of a different era. Its jokes are crude, its lyrics at times a tinge sexist and misogynistic. It’s rough hearing the phrase “I need a girl that I can train” in 2019 (the refrain of album opener “Dumpweed,”) though it was noticeable that Skiba changed another problematic lyric, originally “Your mom’s a whore” (on “Dysentary Gary”) to “Your dad’s a whore.”

Elsewhere in the main set, Lil Wayne came back to the stage to help make “What’s My Age Again?” a genre mash-up:

Thankfully, if early Blink-182’s lyrics turned you off, you can always count on Travis Barker to put on an otherworldly show behind the drum kit. He smashes his skins with a precise thunder, pummeling them so hard it’s amazing he can do this night after night. But for one song, “Mutt,” he gave way to special guest Josh Dun, the drummer of Twenty One Pilots.

Hoppus said Dun was nervous about the moment, but he nailed it:

@joshuadun of @twentyonepilots subbed in for @travisbarker on @blink182’s Mutt – and he was apparently pretty nervous about it per @markhoppus 👀 pic.twitter.com/7UTzvE9fR1

Other special guests joining Blink-182 included Alex Gaskarth of All Time Low and Hoppus’ side project Simple Creatures, who helped sing “Going Away to College,” Jason Aalon Butler of Fever 333 (who played one of his own band’s songs with Barker prior to the Enema set-closer “Anthem”), and a young protege of Barker’s.

When it came time for Barker’s actual solo, during the post-Enema set and after Hoppus and Skiba played two acoustic songs in the middle of the crowd, it was a sight to behold. Taking a cue from Tommy Lee, Barker played in a giant metal ball that spun around in the air, set to a wild light show.

This video is from a recent show and not L.A., but it was the same experience:

There really isn’t much fans could take issue with on this tour, in terms of Blink-182’s setlist. Yes, Delonge still isn’t there, and he may never rejoin them on stage — but Skiba does an admirable job filling in and doing a lot of the heavy lifting, vocally.

In terms of the songs they didn’t play, “The Rock Show” was a notable omission, but fans have had years of opportunities to see them play that one live. They also only chose one song from their upcoming album, Nine, to play — “Blame It On My Youth” — but in all, the night delivered a great sampling of Blink-182’s various eras and sounds over the years, both classic and new.

But more than anything, this was a great night of entertainment, from start to finish.

The tour will resume on August 27 in Irvine. The remaining dates: 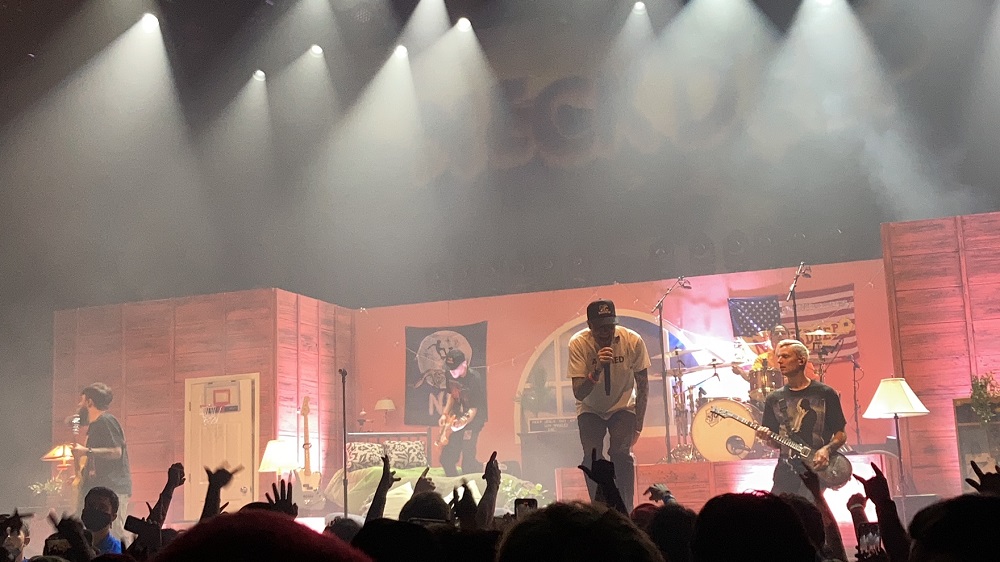 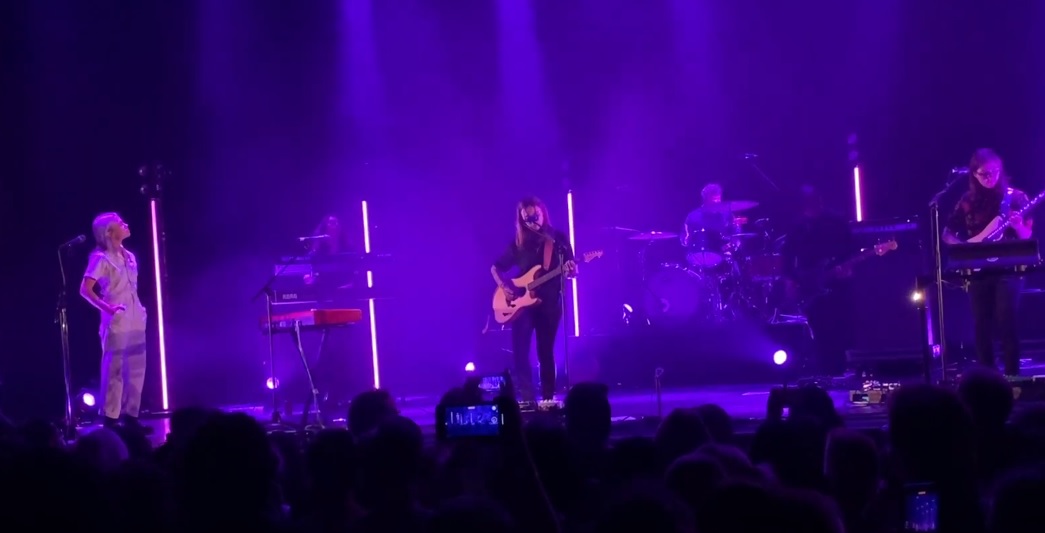 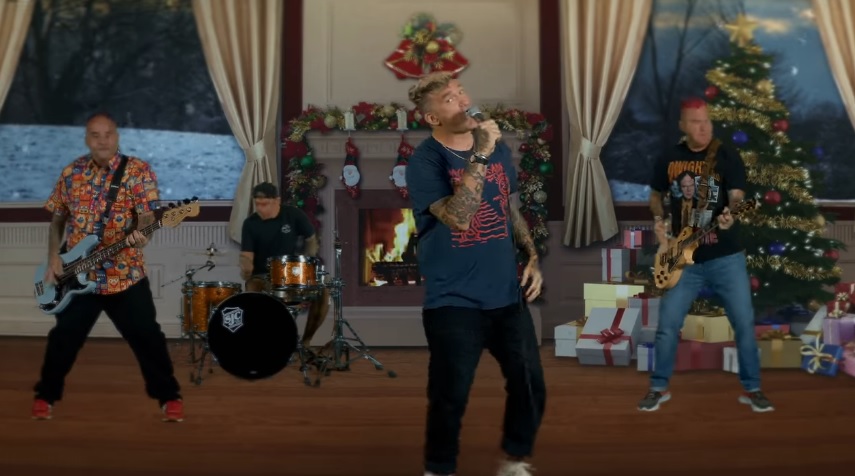