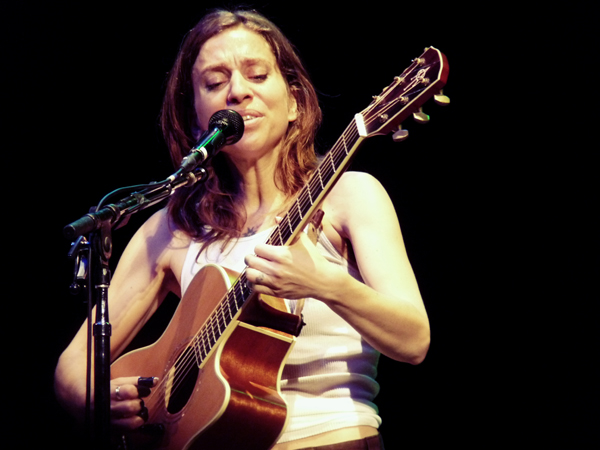 ANI DIFRANCO at the Orpheum Theatre – March 24, 2012
It’s not that she’s wiser or less incensed, maybe not even that’s she’s feeling more joy and less shame, but something about Ani DiFranco has evened out over the years. One could chalk it up to age and motherhood, and likely she would herself, but the reasoning is irrelevant. Though she’s far from being at peace with the world, there’s a sort of serenity that surrounds her now – and just as remarkably, it’s mirrored back from her once overly-rowdy crowd.
Despite canceling her show the night before in Las Vegas due to an ear infection, Ani showed up at the Orpheum in Los Angeles raring to go. “I’m so happy to be here with you,” she said. “And so happy not to be in pain!”
Jokes about not being able to hear anything (“so you’ll have to tell me later what the show sounds like”) were good-naturedly sprinkled throughout, closing any chasm between stage and audience, turning ornate 1930s décor to intimate living room.
After opening with 1991’s high-energy Anticipate, DiFranco led naturally into Splinter, a tune from her latest, ¿Which Side Are You On?

And with nothing more than that, she produced the desired effect: 2,000 heads connected – to each other, to the music, to the world outside.
What the fiery folk singer has always maintained is the ability to ignite and inspire, and no amount of mellowing will dull her spirit or that of her followers. The 20-song set was a journey not just through her 2-decade career of tales personal and political, but through unrelenting passion and the evolution of emotion.
Accompanied solely by New Orleans jazz drummer Herlin Riley, her always impressive guitar playing was especially fast and sharp. At times words were lost to Riley’s rhythms, but his precision and feel so masterful it was hard to fault. While Ani’s been backed by bands varying wildly in size and style over the years, they’ve never been short on skill. 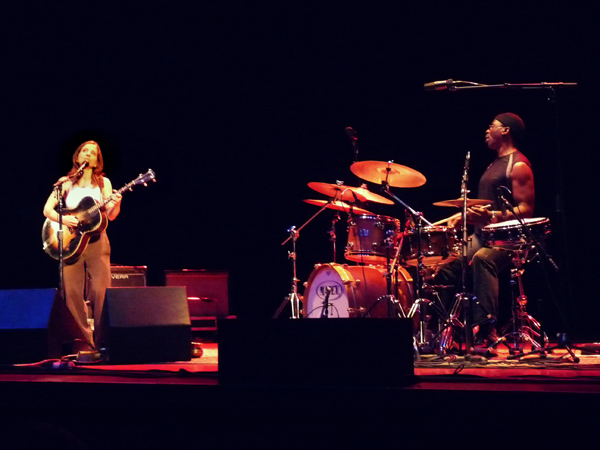 As well as reaching into her bag for fan favorites such as Gravel and Fire Door, with recent compositions like Nicotine and Life Boat she painted an inspired picture of her current life in New Orleans as a wife and mother. And after embracing the City of Angels with the statement, “I feel you, LA. There’s a lot of bullshit here but there’s a lot of dreamers, a lot of artists,” she sang Albacore, a “wedding song” spilling over with love and gratitude so intense one couldn’t help but take it on.
The transition from there was into one of the most powerful moments of the night, Little Plastic Castle’s driving Swan Dive, an “early attempt at a happy song.” (Something she’s “getting better at due to extenuating circumstances.”) Drummer Riley shone throughout, digging into the song’s hint of joy and propelling it skyward.
He managed similarly with Marrow and As Is, producing effortless blasts of impressive percussive minutiae to a wildly enthusiastic response.
Of course there was no shortage of social commentary, most prevalent in the inclusion of Coming Up, Zoo, and J, the latter a devastated, desperate plea depicting our current state of government.
Never one to shy from the truth –-at least in her lyrics– early in the night Ani offered a particularly eyebrow-raising set of thoughts with the new Promiscuity, a song about the path to “earning” monogamy.

It’s with this security she was able to offer the previously angst-mired Untouchable Face –with its chorus of “Fuck you”– as a rousing, lighthearted number. Just as DiFranco has acted as a guide and inspiration in her struggles, hopefully now she acts as one in her contentedness, as well as in her continued activism.
To close the main set she brought the crowd to their feet with a revision of the 1930s folk song Which Side Are You On?, popularized by Pete Seeger, her nod to “next week’s labor struggle.”
DiFranco has never been one to demand blind accord. With her version of the protest song she’s requesting, as ever, a shift in consciousness, that we ask ourselves and our leaders the hard questions. From wherever on our own paths we may be. 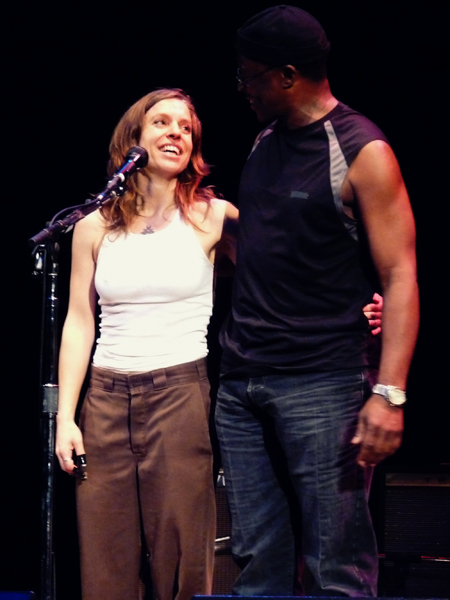